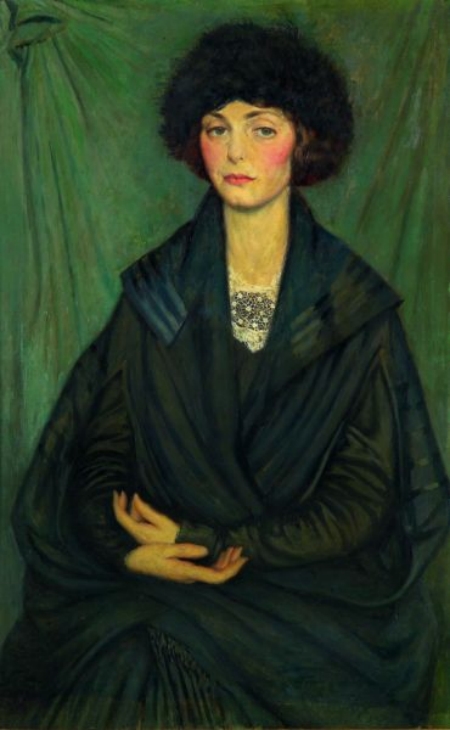 Provenance: Through the sitter's family.

N.B.The sitter, Catherine Wallstrom, used the pseudonym Katherine Edwards in her modeling career. She frequently modeled for Hale as well as many other Boston artists, including William Paxton, Ives Gammel, Gertrude Fisk, and Cyrus Dallin.
Philip Hale was born in 1865 in Boston, to the famous reverend Edward Everett Hale. After having studied in America for years and mastering painting, Hale first studied abroad in Paris at the Academie Julian with Doucet and Lefebvre as well as at the Ecoles des Beaux Arts. He returned to the states around 1895, where he was considered a leader in the Boston School of Painting. Hale was a member of the National Academy of Design, the Philadelphia Art Club, National Arts Club, Guild of Boston Artists and Portrait Painters. He received many awards in his life for his work.
A sketch of Wallstrom by Hale, newspaper clippings and ephemera regarding Catherine Wallstrom and Philip Leslie Hale, along with a list of artists who have used Wallstrom as a model penned by Catherine Wallstrom, accompany the lot.
Estimate $6,000-8,000