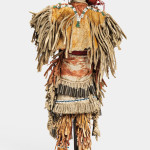 Philip and Patricia Marco formed a film production company in the 1970s which would eventually become one of the premier television production companies in the United States, producing hundreds of award-winning projects.… Read More