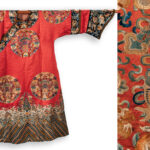 The symbols depicted on a textile can tell you quite specifically what the function was and who would have owned it. Chimes, twin fish, and double happiness characters are symbols for blessings in marriage, designating a marriage robe. At the same time, Imperial dragons were strictly only used on Imperial textiles until the later parts of the Qing dynasty. 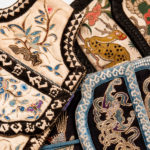 Primarily dating to the end of the Qing dynasty, the collection showcases purses, fan cases, and collars. The accessories are embellished and embroidered in a variety of stitches with decorations rich in blessings for the wearer, and provide an excellent introduction to the wider symbolism and techniques unique to Chinese textiles.… Read More 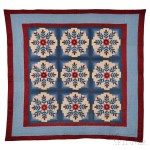 Over the past few years, quilts and quilting have experienced resurgence in popularity. The appeal of quilts and textile art is as varied as the patterns they employ. Whether it is the bold, bright, and contrasting colors or the strength and diversity of the design, quilts have consumed the interest of contemporary artists and enthusiasts alike.

The origins of quilting are seen in the 17th century when chintz and calico fabrics were beginning to be imported from India.… Read More