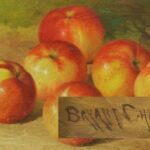 Understand the terms used throughout catalog descriptions for Fine Art at Skinner. Robin S.R. Starr, Vice President and Director of American & European Works of Art, explains and illustrates how, where, and why these terms are used at Skinner in the accompanying video.

Attributed toThe work may be by the artist’s hand, but leaves some question or doubt as to actual authorship.

School ofA work of an unknown follower executed in the style of the artist and contemporary in period.… Read More 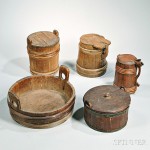 Whether painted or undecorated; staved or tinned, with or without lids; utilitarian buckets, pails, and firkins have for over a century, been popular with collectors. Like so many things with the passage of time, the terminology that is used to describe these humble objects has become muddled.  I have always been a firm believer that when describing historical objects, we should describe them today as they were described during their original period of use.… Read More