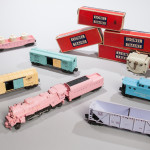 Collecting and playing with model trains has been a popular past time for over one hundred years. At the forefront of this train-crazed mania was Lionel Trains. These sturdily constructed toy trains were praised and collected for their life-like realism by adults and children alike. Originally marketed towards fathers and sons to promote bonding, electric trains started to emerge as a male-centric hobby. Mothers and daughters might be visible in their advertisements, but more as someone who could passively view the trains in motion instead of engineering them.… Read More