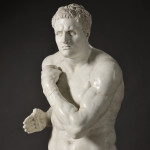 With looks of fierce determination on their faces, two boxers take a firm stance and raise their arms in defense, ready to fight. However, they will never lunge towards each other. Despite their rippling muscles and expressions of strength, these two men are in fact seven- foot-tall statues.

This pair of larger-than-life Carrara marble figures of boxers, known as pugilists, will be available in the European Furniture and Decorative Arts Auction at the Skinner Boston Gallery on July 19, 2014.… Read More 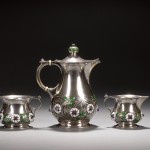 David Andersen opened his eponymous shop in Christiania (now Oslo) Norway in 1876. As a designer and retailer specializing in jewelry and silver wares, Andersen’s business model closely mirrors that of Danish silversmith Georg Jensen, who was twenty-three years his junior. Jensen opened his shop in 1904. Upon Andersen’s death in 1901, his sons took over company operations and designs. Today, David-Andersen (the company’s name since the early 20th century) is practically synonymous with mid-century enameled silver jewelry.… Read More 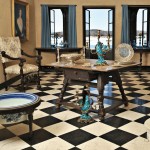 Designed and furnished in the Mediterranean Revival Style, Quattro Venti is the last great private residence in Annisquam Village, a small fishing hamlet near Gloucester, Massachusetts. Quincy Bent, vice president in charge of production at Bethlehem Steel at the turn of the last century, built the summer retreat around 1912.  His forebears purchased quarries in West Gloucester in 1820 and originally used the property, situated on the tip of the Annisquam peninsula, to transfer stone from river barges to schooners for delivery to cities up and down the East Coast.… Read More