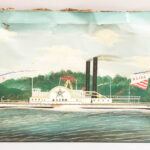 “Big deal. What are Yonkers, anyway?”

This puerile exchange has been circulating for years. It’s time to give a bad joke a good answer.

Yonkers—named for Adrian Van der Donck, an early Dutch settler and a “jonkeer” (Dutch for young gentleman) — is the fourth largest city in New York state. It has a rich and interesting history, from its 17th century beginnings as an agricultural frontier settlement of the Dutch colony of Nieuw Amsterdam, later known as New York, to its 21st century renaissance as a diverse and gentrifying near-in suburb of Manhattan.… Read More