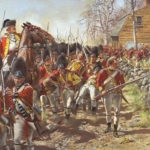 I have spent many hours walking the grounds of the Gettysburg battlefield, tracing the events that took place there in July 1863. Just a few weeks ago, I was at the site again, this time with a beautifully engraved pistol that had been presented to a Confederate soldier who fought in the battle: Capt. Thomas James Eubanks of the 48th Alabama Regiment.… Read More