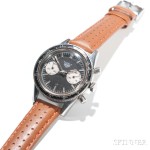 Wristwatches and automobile racing have been closely linked to each other since the early 20th century. In a sport so heavily reliant on speed and times, having an accurate and accessible timekeeper is paramount. Modern chronographs, the predecessor to the stopwatch, were created in the early 19th century and were primarily used for artillery. Through the 20th century, chronograph wristwatches transitioned for use into other activities such as diving, submarine maneuvering, and airplane piloting.… Read More