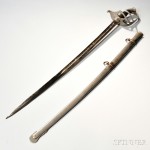 MARLBOROUGH, MA –Skinner, Inc. will hold an auction of Historic Arms & Militaria featuring  pistols and muskets, historic documents, and antique arms from the time of the American Revolution through World War II.  Items on offer include artillery, swords, pistols, powder horns, uniforms, muskets, and rifles.  The online-only sale will begin on April 21, 2016 at noon and will conclude on April 29, 2016 at 10AM; live previews will be held at Skinner’s Marlborough Gallery on Wednesday, April 27 and Thursday, April 28 from noon to 7PM, and on Friday, April 29 from 8AM to 9:30AM.… Read More

Stephen Jones was on hand to lend his creative flair to three audience members as he suggested hats which best suited their style.… Read More