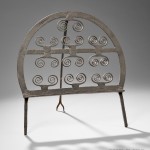 Guest blog post by Elliott and Grace Snyder.  The Howard Roth Collection of Early American Iron will be sold in Skinner’s August Americana auction on August 9, 2014 at 10AM in Marlborough, and in the Americana – Online auction from August 4, 2014 at 2PM through August 11, 2014 at 4PM.

With his enthusiasm for the material, perseverance, and competitive spirit, Howard rarely let a great piece of American iron get away. It seemed that no matter how early we would show up for the opening of an antiques show, inevitably there he was in “his place” at the head of the line.… Read More