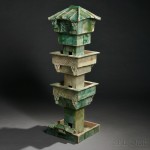 In China, during the Han dynasty (206 BC through AD 220), burials commonly included tomb pottery. China’s tradition of pottery-making began in ancient times well before the Han dynasty, but by this time, improvements to pottery-making techniques allowed for extensive production of items for both daily and ceremonial use. These sophisticated new techniques eventually led to the three-colored glazed-ware (sancai) of the Tang dynasty as well as low-fired glazed-wares of the Ming and Qing dynasties.… Read More