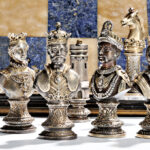 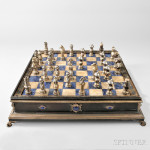 Chess sets depicting actual historical figures and their campaigns have dominated the chess world for centuries, but  we have not found anything like the French .800 Silver and Parcel-gilt Chess Set (Lot 60, $8000-12,000), with the mark of the famed Art Nouveau jeweler Guillemin Frères on each piece.   In this set, an entire court of players squares off against the other, one with a clear Western aesthetic, the other parcel-gilded and bronzed are in a more “Eastern” attire.… Read More