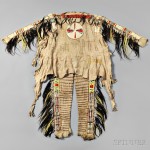 Skinner to offer an historic example of a Blackfeet war chief’s shirt and leggings form the 1830s in its American Indian & Ethnographic sale on May 6, 2016. This will be the first time a complete suit from this period has been available for acquisition in North America in over a century.