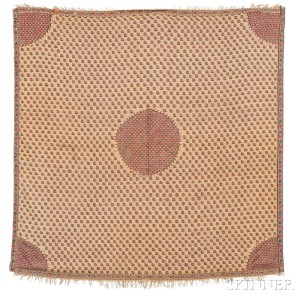 Lawrence Kearney, Director of Fine Oriental Rugs & Carpets, notes that this auction includes three special collections with a preponderance of fresh-to-market examples of woven and embroidered artistry. Many pieces are early, from 18th and 19th-century shawls to early 19th century floor coverings, with the mellow coloring and fine workmanship that characterizes textiles of this era.

One group of rugs and carpets is from The Lucius D. Potter Collection at Historic Deerfield and is being sold to benefit that venerable organization. Six months ago, these rugs were part of a distinguished museum collection. After Skinner’s auction, they can again add warmth and distinction to private homes. 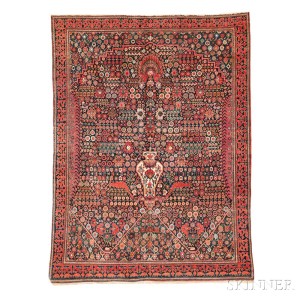 Another group of over forty pieces of mostly Caucasian origin is from a private collection formed in the 1960s. As Kearney notes, they are a time capsule assembled fifty years ago by a collector of taste and means, when interest in these rugs was high and selection was broad.

Kearney points to several standout Persian rugs as highlights of this auction. These are examples of the exceptional skill and highest-quality materials used in urban workshops. The rugs are notable for their fine condition, many woven of silk or with silk foundations. 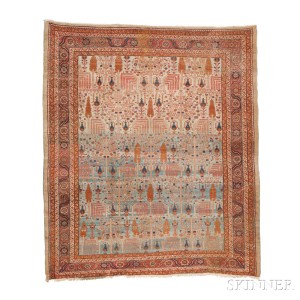 Workshop rugs, with their carefully planned designs, elegantly turned corners, and consistent color and material, are hard to repair. Pieces in excellent condition, like these, are especially desirable.

The other major class of what are broadly categorized as “oriental” rugs are products of cottage industry, made in villages from readily available wool fiber and sometimes employing home-made (and occasionally inconsistent) dyes. Unlike urban workshop rugs, these are not made from a carefully plotted, carefully followed professional design.

Much in demand today for their perceived compatibility with contemporary and modern interiors, these coarser weavings are easier to repair. Cottage industry rugs have a great appeal for their colorful, open geometric patterns, especially compatible with the minimalist forms that feature in much mid-century design. 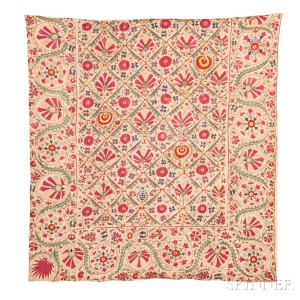 The auction also contains an important group of antique Lakai embroideries from central Asia. Lot 86, a Lakai Silk Needlepoint Ilguch, Central Asia, late 19th century ($2,000-2,500) is a brilliant example of these tribal textiles traditionally made by a bride as an important part of her dowry.

Lawrence Kearney observes that antique and vintage floor coverings offer quality workmanship and good looks in something that will keep its value over time, unlike most mass-produced new rugs and carpets that are like wallpaper: repetitive, dull, and predictable. For example, Lot 51, Heriz Carpet, Northwestern Iran, c. 1920 ($2,000-3,000), will lend personality and distinction to any room.

Most of the pieces offered by Skinner in this auction have provided beauty underfoot for a hundred years or more. Thoughtfully used, they have many years to come.

Widely regarded as one of the most trusted names in the business, Skinner appraisers have appeared on the PBS-TV series, Antiques Roadshow, since the show’s inception. Skinner has galleries in Boston and Marlborough, Massachusetts, as well as in New York City and Miami, Florida, with bidders participating in person, by phone, and online. Join auctions live with SkinnerLive! and Bidsquare. For more information and to read our blog, visit the website at www.skinnerinc.com, find us on Facebook, or follow us on Twitter and Instagram.