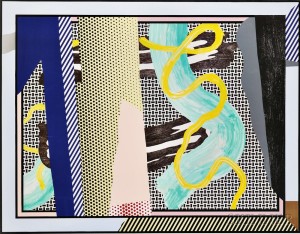 BOSTON, MA – April 29, 2016 – On Friday, May 13 Skinner, Inc. will host an exceptional two-part auction, kicking off at 12PM with Fine Prints & Photographs and continuing at 4PM with Fine Paintings & Sculpture. The auctions showcase a strong selection of paintings, sculpture, prints, photographs, and works on paper ranging from Old Master prints through Modern and Contemporary offerings.

In conjunction with these live sales, Skinner is holding its Fine Art online auction. Bidding will be open from May 9 through May 16; all of the works will be available for in-person inspection during the preview hours cited below.

A fine selection of lithographs produced by the Associated American Artists (AAA) will be featured in the sale. From 1934 to1945, the AAA brought affordable fine art to the American public through the production of limited edition prints, sold for as little as five dollars, available by subscription, and distributed through the mail. The works often reflected on social issues of the time, which was dominated by the Great Depression. Approximately 600 different prints (mainly etchings and lithographs) were produced in editions ranging from 125 to 250 impressions. 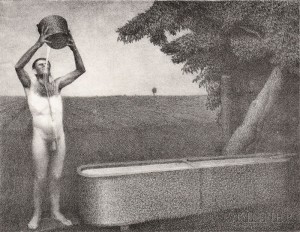 The May sale will also showcase a superb group of modern and contemporary prints, including Oiseau de passage, 1961, a color aquatint by Georges Braque (Lot 50, $3,000-$5,000) and Salvador Dalí’s lithograph Drawers of Memory, 1965 (Lot 57, $4,000-$6,000). Our cover lot is Robert Motherwell’s lithograph Lament for Lorca, 1982 (Lot 79, $8,000-$12,000). The title refers to the fall of the Spanish Republic and the beginning of the Spanish Civil War—a subject to which Motherwell returned several times; in 1936, at the outbreak of the war, poet and playwright Federico García Lorca was assassinated by a group of fascists.

Trunk, from the series Seven Characters, 1982, by Robert Rauschenberg is an unusual mixed media work with cast paper, fabric collage, mirror, and embroidered hanging medallion (Lot 83, $5,000-$7,000). Rauschenberg conceived of this series as a collaborative project with China and its artists at a time when China was far from open to Westerners. While he came to the country with a plethora of materials to employ in the project, he found inspiration in the elements he discovered there, including the famous “1,000 year paper” or Xuan paper; calligraphic symbols; silk wedding bed clothes; Chinese propaganda posters; and seals. The result was a group of seventy unique compositions, each with variations in the poster elements, the silk medallions, and the ribbons. By removing these elements from their original contexts through cutting and reassembly, Rauschenberg created new relationships and contexts. 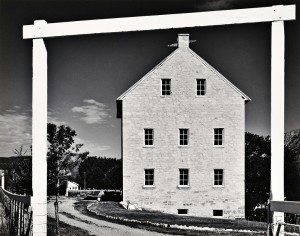 The selection of fine photographs in the May auction features works by 20th century masters, including Ansel Adams, Manuel Álvarez Bravo, Walker Evans, Wright Morris, Gordon Parks, and others.

Among the highlights is a photogravure of New York’s iconic Flatiron Building by Alfred Stieglitz (Lot 91, $2,000-$3,000). As a founding member of The Photo-Secession and publisher of Camera Work, Stieglitz was a major force in the promotion and elevation of photography as a fine art in America at the turn of the 20th century. This view demonstrates the Pictorialist aesthetic—painterly, soft-focus images with subtle tonal variation and unusual compositions—that Stieglitz first championed. At the same time, Stieglitz’s embrace of a more modernist depiction of contemporary life is reflected in the architectural form of the new building. 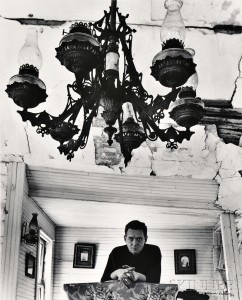 Also of interest are two Abrams Original Edition prints from the 1970s: Arnold Newman’s 1948 portrait of Andrew Wyeth in his studio in Chadds Ford, Pennsylvania (Lot 101, $1,000-$1,500) and Gordon Parks’ depiction of an unemployed domestic worker in Paris from 1950 (Lot 102, $1,000-$1,500). In 1972 the publisher Harry N. Abrams announced a program offering limited edition black-and-white prints by ten eminent photographers. Each photograph (in editions of 99) was made from the original negative by the artist, assisted by a master printer from a custom lab. The photographers, representing a range of practices from photojournalism to creative photography, included Arnold Newman and Gordon Parks, as well as Wynn Bullock, Ernst Haas, Philippe Halsman, Marc Riboud, and Aaron Siskind, among others. It was the hope of the project’s founder and director Peter Pollack that Abrams Original Editions would be as successful as limited editions of fine etchings and lithographs, providing income to the artists while promoting photography as a good investment. 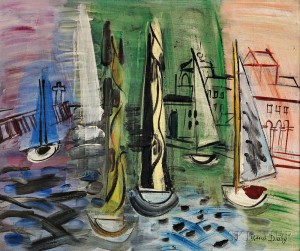 Among the 19th century American works in the sale are a majestic oil landscape of a river valley by Edmund Darch Lewis (Lot 255, $20,000-$30,000) and a tranquil Hudson River view by F.A. Silva (Lot 242, $15,000-$20,000), the latter having the unusual provenance of descending through the collection of a cook on the Orient Express. Early 20th century selections include a wonderful group of watercolors by John Whorf, including two Parisian views, and several fine works by A.C. Goodwin, including oils of Mount Vernon Street and T Wharf and a pastel of The Boston Common Frog Pond.

In addition to the live auctions on May 13, a selection of over 100 works is available online and may be previewed alongside the live auction pieces at Skinner’s Boston Gallery. A brief sampling of works in the online auction include prints by Frank Benson, James Abbott MacNeil Whistler, Frank Stella, Mark Tobey, and Fernando Zobel, photographs by Brett Weston, James Van Der Zee, and Eliot Porter, and paintings by Lilla Cabot Perry, Mabel Woodward, George Loftus Noyes, Molly Luce, and Sam Barber. Bidding on these items is available online only, from May 9 through May 16.

Previews for the auctions are free and open to the public. Previews will be held in Boston on Wednesday, May 11 from noon to 5PM; on Thursday, May 12 from noon to 8PM; and on Friday, May 13 from 9AM to 10AM. Illustrated catalogues 2895B (Fine Prints & Photographs) and 2896B (Fine Paintings & Sculpture) are available from the Subscriptions Department at 508-970-3240 or from the Gallery. Prices realized will be available online at www.skinnerinc.com during and after the sales. The Skinner website also enables users to view all lots in the auctions, leave bids, order catalogs, and bid live, in real-time through SkinnerLive!