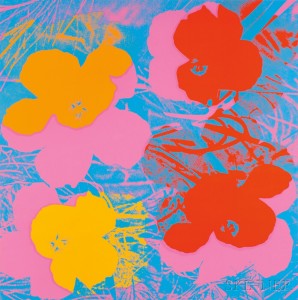 BOSTON, MA – January 5, 2016 – On Friday, January 22, 2016, Skinner, Inc. will host an exceptional two-part auction, kicking off at 12PM with Fine Prints & Photographs and continuing at 4PM with Fine Paintings & Sculpture. The auctions showcase a strong selection of works of art ranging from Old Master prints through Modern and Contemporary offerings.

In conjunction with the live auctions, Skinner is holding a Fine Art online auction. Bidding will be open from January 19 through January 25; all of these works will be available for in-person inspection during the regular preview hours cited below.

An encyclopedic group of Andy Warhol works from different collections leads the prints and photographs session. This includes 25 Cats Name[d] Sam and One Blue Pussy (Lot 68A, estimated between $60,000 and $80,000) and In the Bottom of my Garden (Lot 69, $12,000-18,000). These two Warhol books date from the 1950s, when Warhol was supporting himself through commercial work. They employ the blotted ink line technique that he developed while at the Carnegie Institute of Technology – the same one he used for his advertising work. While the style is not that of his Pop art, the issues raised by the books are the nature of originals and reproduction and the rise of commercialism and mass-production in fine art. 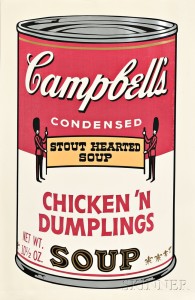 Chicken ‘n Dumplings from Campbell’s Soup II, 1969 (Lot 69A, $10,000-$15,000) and the Flowers suite of 10 screenprints from 1970 (Lot 70, $400,000-$600,000) are seminal works from the height of Warhol’s Pop period. Few Warhol images are more recognizable and iconic than his Soup Cans. They are the embodiment of the crass commercialism of the post-World War II American consumer culture. If the subject of the Flowers suite is less bluntly commercial, the prints still raise issues of originality vs. mass-production in our culture and our art. The ten works show precisely the same subject but are printed in different color configurations, and their square compositions allow them to be hung in whatever orientation one chooses. Last but not least, Mick Jagger (Lot 71, $40,000-$60,000) from 1975 is indicative of Warhol’s obsession with the cult of celebrity. The work is signed by both the artist – who by the 1970s has become a Pop icon himself – and Jagger. The inclusion of the Jagger signature is a nod to collecting rock-and-roll memorabilia.

In conjunction with these Warhol works, Trevor Fairbrother will be presenting his lecture Andy Warhol = Nobody’s Fool, on January 21 in Skinner’s Boston Gallery. In 1987, shortly before Warhol’s death, Arts Magazine published Fairbrother’s recent interview with the artist as they visited a John Singer Sargent retrospective at the Whitney Museum. During his career as a curator, Fairbrother organized exhibitions of Warhol’s art that benefited from his friendship with the artist. In this lecture, he considers the weird fascination with, and bewildering legacy of, this great pop artist nearly thirty years after Warhol’s death. 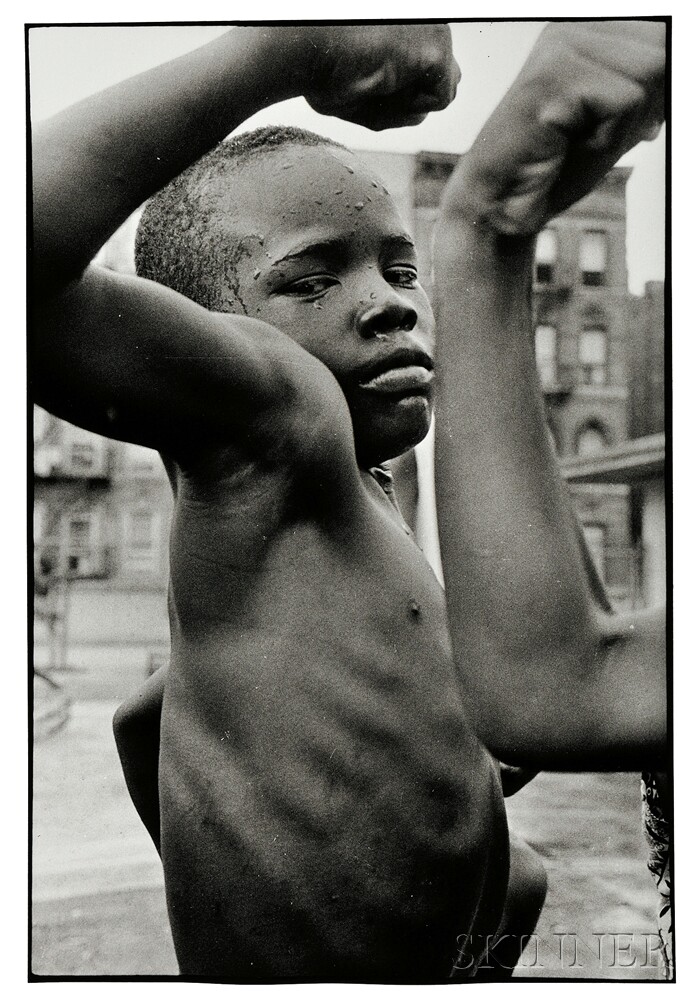 The selection of fine photographs featured in this sale ranges from a 19th century salt print of a river bank in Algeria and an iconic image by Edward Sheriff Curtis to work by 20th century masters, including Manuel Álvarez Bravo, Harry Callahan,  Arthur Rothstein, and others.

Outstanding lots include John Beasley Greene’s 1855-56 albumenized salt print of a river bank in Algeria in which he exploits the sunlight to create subtle gradations of tone and to accentuate the textures of the rocks and foliage (Lot 76, $3,000-$5,000). Another important work is a rare double border gelatin silver print of Canyon de Chelly (Lot 79, $3,000-$5,000) by Edward Sheriff Curtis, who recorded the vanishing cultures of the United States’ Native American population in the early 20th century. Additional noteworthy lots include Bill Brandt’s Maid at Window, Mayfair (Lot 86, $4,000-$6,000) from his 1930s portrait of London life which revealed incisive social contrasts, and an image of a 1944 maquette prepared by Man Ray for an unpublished book that he called Objects of My Affection (Lot 89, $1,000-$2,000) 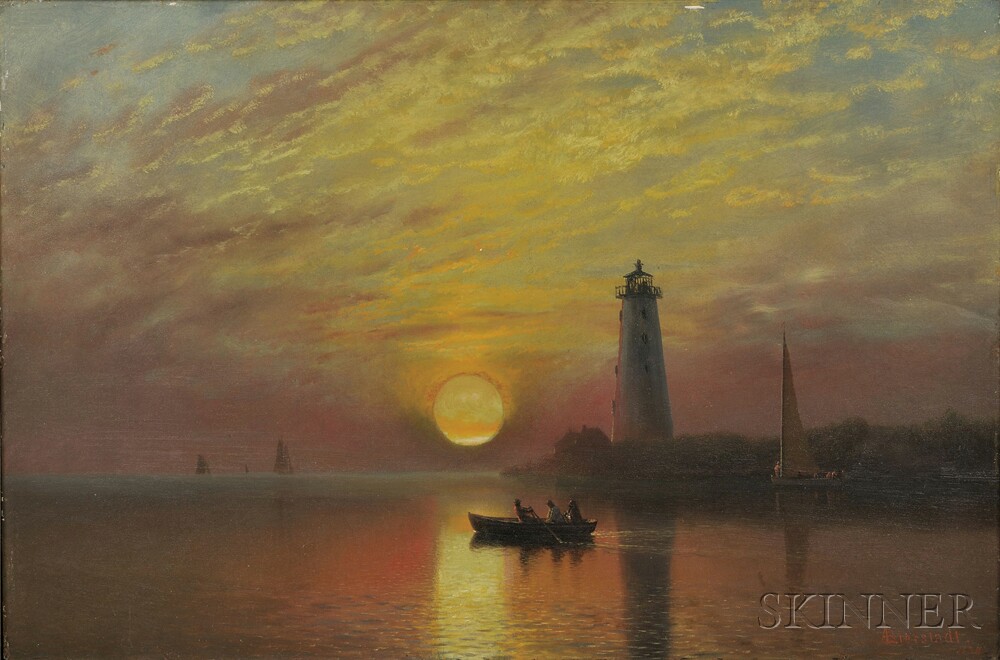 Florine Stettheimer’s joyful fauvism heads the paintings session with her Floral Still Life (Lot 355, $75,000-$100,000).Stettheimer is not a household name, but she should be. She was an influential Modernist, and showed at Knoedler & Co. and the Whitney Museum of American Art. She was powerful enough to turn down Alfred Stieglitz’s request to show her works, and the salons she held in her New York apartment were regularly attended by the art world’s elites, including Georgia O’Keeffe, Marcel Duchamp, and Francis Picabia.

American 19th century landscape painting is also well represented. Two works by Alfred Thompson Bricher exhibit the breadth of his stylistic range. Hudson River at West Point of 1867 (Lot 250, $15,000-$25,000), with its mix of tranquility and majestic panorama, is indicative of his connection to the Hudson River School painters. Ocean Cliffs, Sunlight (Lot 245, $22,000-$28,000) shows the style typical of his glistening seas with dramatic crashing waves, tempered by cloud-filled skies. Meanwhile, Alfred Bierstadt’s 1878 Lighthouse, Newport, Rhode Island (Lot 251, $40,000-$60,000) typifies American Luminism. Although he is most often associated with views of the American West, Bierstadt’s roots are found in New England. He was raised in New Bedford, Massachusetts, and began building his reputation painting the White Mountains of New Hampshire.

Please join Skinner for a reception and Andy Warhol = Nobody’s Fool, a lecture by Trevor Fairbrother on Thursday, January 21, at 5:30PM. The event is free and open to the public. Please RSVP to 508-970-3240 or events@skinnerinc.com.

Previews for the auctions are free and open to the public. Previews will be held in Boston on Wednesday, January 20 from 12PM-5PM; on Thursday, January 21 from 12PM-8PM; and on Friday, January 22 from 9AM-10:30AM. Illustrated catalogs 2877B (Prints & Photographs) and 2878B (Paintings & Sculpture) are available from the Subscriptions Department at 508-970-3240 or from the Gallery. Prices realized will be available online at www.skinnerinc.com during and after the sales. The Skinner website also enables users to view all lots in the auctions, leave bids, order catalogs and bid live, in real-time through SkinnerLive!

Collectors can also bid on over 150 lots at their convenience during Skinner’s Fine Art Online (2876T) auction, taking place January 19 through 25. While the bidding is online, the works – including prints, photographs, paintings, sculpture, and works on paper – can be viewed live during the regular preview hours cited above.