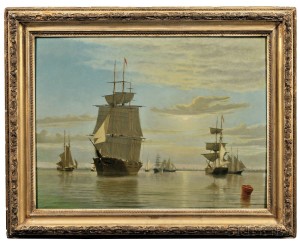 Collectors can also bid on over 300 lots at their convenience during Skinner’s Americana Online auction, taking place October 19th through October 26th. Skinner specialists have hand-picked a selection of American furniture and decorative arts, as well as early 20th century cast iron, 19th century lithographs, and oriental rugs and carpets. Bidders also have the added value of previewing the online-only lots in person during the regular Boston preview hours.

The sale is led by a quietly breathtaking oil on artist board painting of Boston Harbor painted in 1859 by William Bradford (Lot 23, Estimate $150,000-$250,000). Depicting a variety of sailing vessels in serene waters, the painting is an early signed example of Bradford’s forays into Luminism – the representation, through light, of the glory of the natural world. Bradford’s deft hand disappears into the work, just as mankind, in the Luminist view, was meant to disappear into and be overwhelmed by nature’s beauty.

So much was thought of the painting after it was painted that, according to a label on the reverse, it was exhibited at a world-renowned event in Boston known as “The National Sailors’ Fair,” held in part at the Boston Athenaeum in 1864, a venerable organization founded in 1807 which still operates as a cornerstone of Boston’s cultural history.

In that year, with the American Civil War still in full swing, Boston presented the Fair, an event of grand scale that would benefit veteran Navy men by, according to a November 11th, 1864 account in the New York Times, “aid[ing] in the establishment of a Sailors’ Home for Seamen and Mariners disabled in the naval service of their country.” The celebration garnered attention country-wide. In that contemporary account, The Times wrote, “The fair itself is said to surpass anything yet held in Boston. Contributions of rare and costly articles, of arms and trophies, of models and designs, of everything, in short, that is attractive, interesting, showy or useful, crowd the tables, which are placed in every part of the grand edifice. The effect of the whole display is said to be magnificent.”

“We are delighted, as a part of our October 25th auction,” said Stephen Fletcher, Executive Vice President and Director of American Furniture & Decorative Arts. “to be able to present Bradford’s Boston Harbor for auction, 3/4 of a mile from where it graced the walls at that important event 151 years ago.” 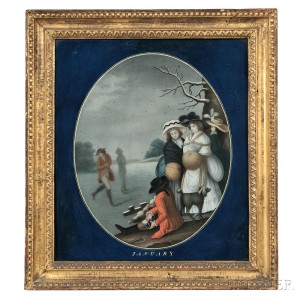 A strong section of the sale consists of a small group of mid 19th century landscapes by Victor De Grailly and Edmund Coates, both of whom worked in upstate New York and New England in the 1840s and 50s. A highlight among the group is de Grailly’s View of the Oxbow from Mt. Holyoke (Lot 100, Estimate $8,000–$12,000), an expansive panorama of the Connecticut River Valley in Hadley, Massachusetts. Folk portraiture is well-represented too, the group led by an arresting painting of a boy holding a hammer and nail, donning a red dress so bright as to border on the abstract: Portrait of a Boy in Red Dress Holding a Hammer and Nail (Lot 37, Estimate $15,000-$25,000). 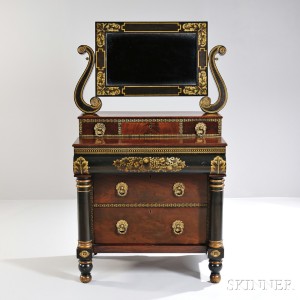 The American Furniture & Decorative Arts auction  also features a varied group of 18th and 19th century pottery and porcelain – Chinese export porcelain, creamware, delftware, and stoneware; an extensive group of 19th and early 20th century textiles – led by a private collection of quilts and another of woven coverlets.

Previews for both the live and online auction will be held on Thursday, October 22, from noon to 5 PM; Friday, October 23, from noon to 8 PM, and Saturday, October 24, from noon to 5 PM. An illustrated catalog #2855B is available from the Subscription Department at 508-970-3240. The catalogue is also available at the gallery. Prices realized will be available at www.skinnerinc.com during and after the sale. The Skinner website also enables users to view all lots in the auctions, leave bids, order catalogs and bid live, in real-time through SkinnerLive!