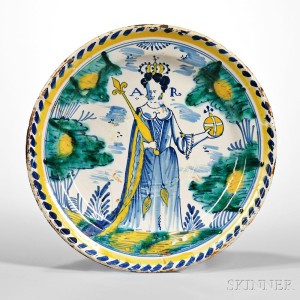 BOSTON, MA – Skinner, Inc. will present its spring auction of European Furniture & Decorative Arts in its Boston gallery on Friday, April 8 at 10AM. With over 700 lots on offer, the auction will feature Part I of the Troy Dawson Chappell Collection of 17th and 18th century English Pottery, as well as a broad range of fine silver flatware and hollowware from the United States and Europe; ceramics from England and the Continent; and European fine and decorative arts of the 16th through early 20th centuries. 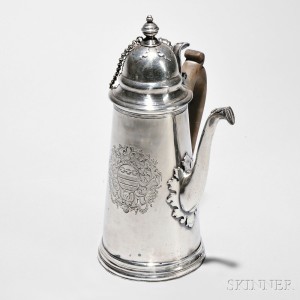 From an interest that began in 1969, Troy Dawson Chappell had a love affair with early English pottery that drove him to collect until the early 21st century. Part I of this collection epitomizes the diversity in his collecting, from the early slipwares to tin glazed earthenware, salt-glazed stoneware, and lead-glazed creamwares. His emphasis was in the diverse and sometimes subtle ways by which potters and decorators produced their wares, and his discerning eye and collecting acumen are exemplified by offerings such as an impressive Tin-glazed Earthenware Charger featuring Queen Anne (Lot 206, $15,000-$25,000); a Salt-glazed Stoneware Ale Mug (Lot 218, $5,000-$7,000); and an Agate Ware Milk Jug and Cover (Lot 249, $2,000-$3,000).

Other ceramic offerings in the sale include a number of Wedgwood items in a wide variety of patterns and forms, with examples of Wedgwood & Bentley black basalt, fairyland lustre, dragon lustre, jasper dip, and encaustic decorated caneware.  English porcelains from Minton, Coalport, Worcester, Ridgway and Samuel Alcock are on offer, and English majolica includes a George Jones “Punch” punch bowl (Lot 370, $5,000-$7,000), a Minton Four-tier Revolving Oyster Stand (Lot 369, $1,200-$1,800) and a Minton Beehive Cheese Dome and Stand (lot 368, estimate $2,500-3,500). In addition to a particularly strong group of French majolica palissy wares from a variety of manufacturers including Charles-Jean Avisseau, the sale includes works by Continental manufacturers Rozenberg, KPM, Sevres, Meissen, and Royal Vienna, as well as a number of Chinese export pieces including an unusual Pair of Chinese Export Porcelain Hexagonal Vases and Covers (Lot 320, $4,000-$6,000). 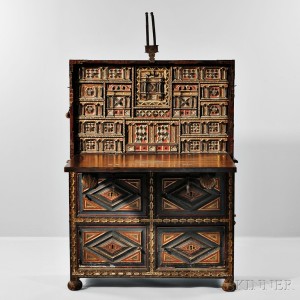 The sale features over 100 lots of fine furniture in a wide array of styles, exemplified by a Spanish Baroque-style Vargueno on Stand (Lot 554, $3,000-$5,000); a Louis XVI-style Gilt-bronze Fruitwood Marquetry Table in the manner of Jean-Henri Riesener featuring mythological figures of Urania and Calliope (Lot 637, $1,000-$1,500); and a Pair of Louis XVI-style Gilt-bronze and Marble Gueridons with gilt-bronze rams head monopedia (Lot 378, $1,000-$1,500.)

An impressive selection of garnitures includes a pair of marble urns; an Empire gilt-bronze astrological-theme mantel clock and other gilt-bronze clock garnitures; a pair of malachite-inlaid marble cassolettes; and a pair of Derbyshire blue john obelisks. There will also be a wide selection of fine Oriental rugs, European paintings, and several early Flemish Verdure tapestry panels. Fine sculpture highlights include an 18th century Florentine Marble Bust of Caligula (Lot 303, $5,000-$7,000), a Bronze of Arthur, Duke of Wellington by Edmund Cotterell (Lot 453, $3,000-$5,000), and White Marble Sculpture of Three Putti by Benoît Rougelet  (Lot 333, $3,000-$5,000).

Please join Skinner on Thursday, April 7 at 6PM for a lecture by Robert Hunter, an archaeologist and ceramic historian living in Williamsburg, VA. Mr. Hunter, editor of the Chipstone Foundation annual publication Ceramics in America, will speak on “The Art and Mystery of Early English Pottery: The Troy D. Chappell Collection.” The event is free and open to the public, and refreshments will be served, but space is limited. Please RSVP to 508-970-3240 or events@skinnerinc.com.

Previews for the auction are free and open to the public. Previews will be held in Boston on Wednesday, April 6 from noon to 5PM and on Thursday, April 7 from noon to 8PM. Illustrated catalog 2888B is available from the Subscriptions Department at 508-970-3240 or from the Gallery. Prices realized will be available online at www.skinnerinc.com during and after the sale. The Skinner website also enables users to view all lots in the auction, leave bids, order catalogs and bid live, in real-time through SkinnerLive!