This auction ranges from prehistoric to present day, American Indian to African tribal, the Pacific to the Caribbean. The sale takes place on Saturday, December 2 at 10 AM at Skinner’s Boston gallery, 63 Park Plaza. Previews will be held on Thursday, November 30, 12 PM to 5 PM; Friday, December 1, 12 PM to 7 PM; and Saturday, December 2, 8 AM to 9:30 AM.

Several important collections are featured, as well as numerous rarities and oddities. Douglas Deihl, department director, sums up: “The auction has great material with broad appeal and excellent provenance, offered at reasonable estimates.”

Among the most notable pieces are two American Indian textiles at the intersection of folk art and history:

Figural motifs from diverse cultures abound in the more than 440 lots in this auction. One of the most unusual is an Easter Island Carved Wood Lizard Man, Moai Moko, c. 19th century, semi-human male form with reptilian head (Lot 89, estimate $6,000-8,000). Another striking example is a Songye Community Power Figure, with copper strips on nose and cheeks, cowrie shell eyes, and small power packs in abdomen and top of head (Lot 82, estimate $15,000-20,000). 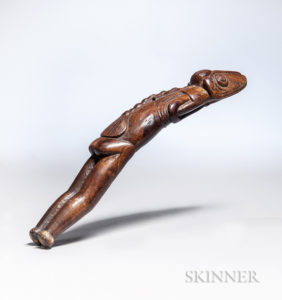 This auction includes a large assortment of sought-after Northwest coast tribal material. An especially notable example from a large collection begun in the 1970s is a Northwest Coast Carved Wood Halibut Hook, c. last quarter 19th century, depicting a shaman being bitten on the cheek by a small animal (Lot 290, estimate $2,000-2,500).

Beadwork is offered in multiple forms, including moccasins, leggings, gauntlets, cradles, pouches and belts. Other beaded objects include a collection of Northeastern beaded bags belonging to Gerry Biron, who wrote a definitive work on the form.

The most important beaded piece is a unique Historic Sioux Beaded Buffalo Hide Knife Sheath from the Little Big Horn Battlefield, c. 1870 (Lot 223, estimate $30,000-40,000). It was collected on the battlefield by William O. Taylor, who served with the 7th U.S. Cavalry. Taylor was part of the group of survivors who had the task of burying Custer and his men. 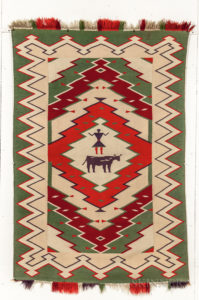 Textiles are well represented, with a number of fine Navajo weavings:

This sale offers a wide-ranging array of ethnographic materials:

Auction previews are free and open to the public. Print catalogs may be purchased at subscriptions@skinnerinc.com. Prices realized will be available at www.skinnerinc.com during and after the sale. The Skinner website enables users to view all lots in the auction, leave bids, and bid in real time. Bidders participate in person, by phone, and online. Join auctions live with SkinnerLive! and Bidsquare.

One of the most trusted names in the business, Skinner appraisers have appeared on the PBS-TV series, Antiques Roadshow, since the show’s inception. Skinner has galleries in Boston and Marlborough, Massachusetts, as well as in New York City and Miami, Florida. Learn more at www.skinnerinc.com and find us on Facebook, Twitter, and Instagram.