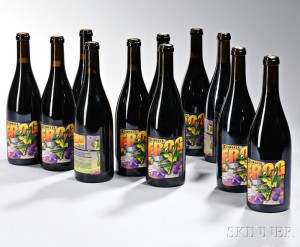 BOSTON, MA – June 19, 2015 – Skinner, Inc. is pleased to announce a Fine Wines – Online auction, beginning Wednesday, June 17th and running through June 24th. Find wonderful wines, spirits and ales to re-stock your cellar, supply a weekend getaway or savor at a dinner party with friends this season, among more than 500 selections from around the world to suit any budget, taste or occasion.

Skinner invites buyers to take a tour through the world’s best wine-growing regions; the auction begins in Champagne, moves steadily through Bordeaux, Burgundy and the Rhone, leaving France for Italy, Germany, Spain and the New World. Many lots arrive from important private collections and have been maintained in professional storage. Bordeaux is heavily represented, with first growth selections including a case of Chateau Lafite Rothschild, 1989 (Lot 1007, estimated between $6,000 and $9,000) as well as a pristine case of Chateau Ausone 2010 from the Right Bank. . Fine examples of Domaine de la Romanee Conti (Lots 1203 to 1206, estimates between $750 to $1,000 and $4,000 to $6,000) highlight a strong section of Burgundy, while a 5-bottle lot of Trimbach Riesling Clos Ste Hune  from Alsace, widely regarded to be the best Riesling outside of Germany, offers exceptional value (Lot 1242, $800 to $1,200).

More than a dozen lots of Madeira will also be on the block, encompassing several superb vintages from the 19th and early 20th centuries.

For those interested in domestic wines, a broad spectrum of California wines will be available; among them, highly sought-after varieties of Peter Michael Chardonnay (Lots 1320 – 1338, various estimates). The highly-rated and memorably-packaged Cayuse Bionic Frog Syrah  from Washington’s Columbia Valley is also a standout, with several vintages and an 11-bottle vertical to choose from (Lots 1393 – 1397, various estimates) 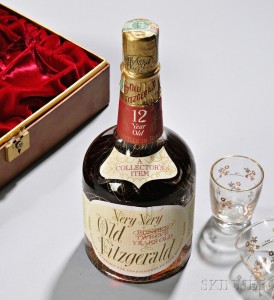 Both seasoned collectors and buyers just getting acquainted with the world of fine spirits will discover a range of offerings at a variety of price points. 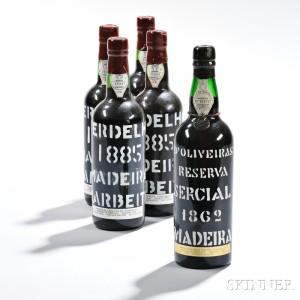 Elsewhere in the auction, an assortment of Old Fitzgerald will be on the block, including pristine bottle of the original, premium bourbon: Stitzel-Weller Very Very Old Fitzgerald, bottled in 1966 and arriving with two tasting glasses in a red presentation case (Lot 1460, $1,500 to $2,000).  Perennial favorite Pappy Van Winkle is well-represented, with several offerings to entice buyers, from 15 year-old to 20 year-old bottlings, as well as a 6-bottle horizontal (Lot 1493, $4,000 to $6,000).

The first brick-and-mortar auction house to present beer live at auction continues to bring intriguing offerings to its online sales. The June auction is replete with excellent ales from Drie Fonteinen (Lots 1413 – 1418, estimates between $30 to $50 and $700 to $1,000) and Cantillon (Lot 1412, $80 to $125). From Mixed Kane Brewing Company arrives an enticing offering of four bottles of 2014 imperial stout, each aged in a bourbon barrel with three variants including roasted cacao beans, dark roast coffee beans and Madagascar bourbon vanilla (Lot 1422, $300 to $400).

The June Fine Wines auction combines the convenience of an online platform with the confidence that each lot comes from carefully vetted cellars and is backed by expert knowledge. Bidders can participate easily from home, with the knowledge that Skinner fine wine specialists are available to answer questions. To participate, simply create an account on the Skinner website.  To arrange for a preview, please contact the Fine Wines Department, at 508-970- 3246 or finewines@skinnerinc.com.

View the catalog on the Skinner website at www.skinnerinc.com/auctions. Log in or create an account to start bidding when the auction opens on Wednesday, June 17th at 10 A.M. Lots begin closing on Wednesday, June 24th at 4 P.M. Each lot in the online catalog displays the current bid, asking bid, and time remaining in the auction, in addition to detailed images and condition information. Place a bid for the next bidding increment or place a maximum proxy bid. The system will automatically bid competitively up to that price. Experts are available throughout the auction to answer questions and provide additional information about the lots offered.