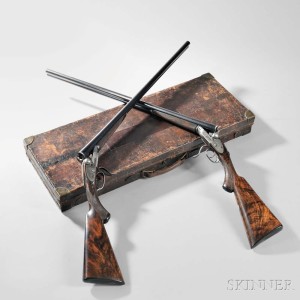 “Doc”, as he was known to his friends, was a hunter, fowler, and competitive marksman. He was an avid firearms collector who admired beautiful craftsmanship, but he did not merely put his guns on display.

Militaria Department Director Joel Bohy notes that Wallace’s extensive firearms collection, of which over 200 are included in this sale, placed a strong emphasis on functionality. “He collected, bought, and used both high-end and more mid-stream arms.” 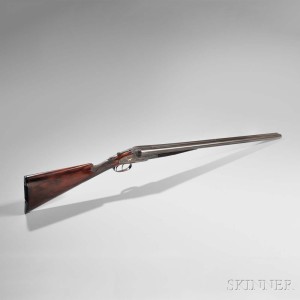 These light, single-shot arms fired a low-power cartridge. Their small bore and limited range, usually less than 100 yards, made them well-suited for shooting pests such as rooks, crows and rabbits without much danger of hitting a farmer in the next field.

Rook rifles were made from their introduction in the late 1860s up until World War I. Doc’s collection includes several examples with their original cases. Lot 13 (Estimated between $2,000-3,000) is a distinguished piece by James Woodward & Sons, with the delicate foliate engraving that often embellished the prized weapons of this period. 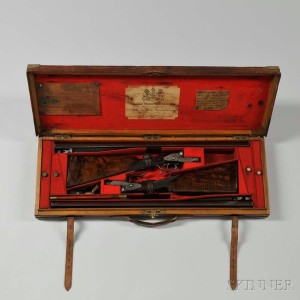 Shotgun over the mantelpiece

Doc owned a large number of choice shotguns, hammer guns, and rifles. Bohy points to Lot 20 ($8,000-12,000) as interesting and fairly rare.  Made in New York circa 1888 by L. C. Smith, this “Syracuse Seven” 12-gauge double-barrel shotgun has fine checkering and elaborate decoration, including a gold spaniel on the trigger guard.

Contemporary fine firearms also featured in Doc’s collection. Included are four shotguns made between 1987 and 1999 by Scottish master gun maker David McKay Brown. These pieces were all custom built. Lot 103 ($12,000-18,000), a 12-bore side-by-side gun, has an engraved portrait of Doc’s favorite Brittany spaniel.

Doc also collected and shot pistols and revolvers. As an undergraduate, he was the captain of the Harvard University Pistol Team, and in later years a long-time competitor in the Greater Boston Pistol League.

Featured in this sale are more than three dozen small arms, including a number of early 20th century Colt and Smith & Wesson revolvers. Lot 204 ($300-500) is a diminutive Colt Model 1908 Vest Pocket pistol. Manufactured around 1916, it is complete with its original box and cleaning tool.

Auction previews are free and open to the public. Previews will be held in Marlborough on Tuesday, October 25 from 12PM – 5PM and on Wednesday, October 28 from 12PM – 7PM. Illustrated catalogs for auction 2946M are available from the Subscriptions Department at subscriptions@skinnerinc.com or from the Gallery. Prices realized will be available online at www.skinnerinc.com during and after the sale. The Skinner website also enables users to view all lots in the auction, leave bids, order catalogs and bid live, in real-time through SkinnerLive!

Skinner reminds bidders that Lots 68-225 and 404-563 require a Federal Firearms License and are not available for online bidding. Interested bidders should contact William Madden at 508-970-3266 for further information.