Skinner is pleased to offer a selection of rare books, among them, the auction’s top lot: Alexander Gardner’s Photographic Sketch Book of the War (Lot 140, estimated between $150,000 and $170,000). Published in 1866, this evocative work comprised of two folio volumes contains one hundred photographs of important landmarks, battlefields, and incidents of the war. Devon Gray, Director of Books & Manuscripts for Skinner, noted, “These important books are original artifacts of a painful period in American history. Furthermore, Skinner’s is a truly extraordinary offering, as the volumes are complete and in their original bindings, which we don’t often see at auction.”

Also available is Maria Sybilla Merian’s natural history of insects of Surinam (Lot 214, $45,000 to $65,000), a beautiful, highly prized book from 1771 illustrated with more than 100 hand-colored plates of South American insects, plants, spiders, and reptiles. Not only are Merian’s images valuable for their contributions to science, they technically and visually striking. “Every page is like a painting, with fresh and bright colors” says Gray. “This work epitomizes the height of bookmaking.” 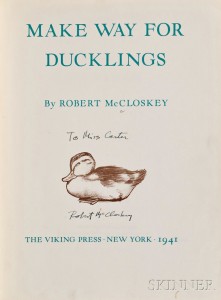 The core of the Children’s Books section offered on November 17 comes from the Collection of Julia F. Carter, who worked under Anne Carroll Moore, distinguished educator and writer and the first full-time children’s librarian at the New York Public Library. Carter also spent twenty years serving the children’s department for the libraries in Cincinnati and Hamilton Counties, Ohio. As a result of her personal relationships with authors, Ms. Carter’s collection includes many inscribed first editions of Caldecott and Newbery Award winners and honorees. Among the highlights of this section is a signed first edition of Make Way for Ducklings (Lot 332, $7,000 to $9,000), a rare signed copy of J.M. Barrie’s The Little White Bird (Lot 312, $8,000 to $10,000), which features the first appearance of the Peter Pan character, and other children’s favorites from the 1930s to the 1950s. The Collection of Julia F. Carter also includes a box of correspondence between Carter and her boss, Anne Carroll Moore, distinguished educator, writer and advocate for children’s libraries.

As well, Skinner will feature a selection of rare documents spotlighting American political figures, cultural personalities, and important moments in history. A major highlight is a 1799 letter penned by Tobias Lear, informing President John Adams of the death of George Washington (Lot 62, $20,000 to $25,000). George Washington is represented again in this auction, through a signed, 1768 lottery ticket (Lot 63, $5,000 to $7,000), from his attempt to raise money to build a road through the Allegheny Mountains, leading to a resort in Hot Springs, Virginia. The effort failed, with Washington’s involvement dissolved in 1771. Nevertheless, the road and resort were ultimately built.

Also available is a lottery ticket signed by John Hancock in 1765 to raise funds for the reconstruction of famed Faneuil Hall (lot 27, $2,000 to $3,000). This Boston landmark, sometimes called the Cradle of Liberty, was originally constructed in 1742, and was witness to many incendiary speeches in Massachusetts’s colonial days. Gutted by fire in 1761, it was rebuilt with the help of funds raised by the sale of these lottery tickets.

In the 50th anniversary year of JFK’s death, Jacqueline Kennedy Onassis also features in this auction, in a strongly worded, handwritten letter she sent to Harvard Professor Richard Neustadt (Lot 34, $5,000 to $7,000). In it, Jackie outlines her impassioned and detailed objections to the way Harvard was dealing with the organization of the Kennedy Institute, Library and Archive, the Kennedy School of Government, and the President’s legacy.

The documents section will also feature a short, but evocative note by Emily Dickinson (Lot 24, $4,000 to $6,000) sent to the mother of author MacGregor Jenkins, with a tiny sketch of Amherst. Dickinson wrote, “I omitted the snow on the roof, distrusting the premonition- Emily.” 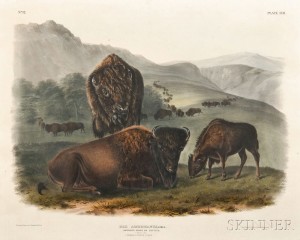 A robust section of maps features eighty lots of rare and early maps and atlases, including an example of Osgood Carleton’s 1801 map of Massachusetts, the first official state map approved by the legislature (Lot 449, $12,000 to $14,000). A massive, nine-panel group of framed maps from 1740, depicting Paris and its environswill also be offered (Lot 478, $2,000 to $3,000). This group of maps was the first to provide detailed and accurate representations of all of the small villages, farms, buildings, parks, roads, and fields around Paris.

Among noteworthy prints for sale on November 17 is a Bison plate from Audubon’s Vivacious Quadrupeds of North America (Lot 346, $7,000 to $10,000). This hand-colored lithograph depicts the adult male and female bison, with a calf, with the herd grazing behind them in the dramatic hilly fields. A first octavo edition of Audubon’s The Birds of America will also be offered (Lot 362, $30,000 to $35,000), as well as several very fine Havell prints of Audubon birds.

Another highlight of the prints section is a 1779 mezzotint portrait of Joseph Brant (Lot 392, $3,000 to $5,000), based on a painting by George Romney. Brant, a Mohawk Chief also known as Thayendanegea, became famous after a tour which took him to London to meet with political leaders, including King George III.

A section of photographs is highlighted by a group of eighty-four images of the American West by Andrew Russell, c. 1869, many of which were published in Russell’s The Great West Illustrated in a Series of Photographic Views across the Continent (Lot 406, $3,000 to $5,000). Russell was employed by the Union Pacific Railroad to record its trans-continental progress in stunning images that documented both remarkable engineering efforts and equally impressive natural scenery. Several groups of extra large photographs by William H. Jackson will also be offered, including Thirty Photographs of the American West and Mexico, c. 1880. (Lot 160, $10,000 to $12,000). Jackson’s work played a pivotal role in convincing the U.S. Congress to make Yellowstone the country’s first national park in 1872.

Previews for the auction will be held on Thursday, November 14 (by appointment only), Friday, November 15 from noon to 5 PM, Saturday, November 16, from noon to 5 PM., and Sunday, November 17, from 9 AM to 10:30 AM. Illustrated Catalog #2684M is available from the Subscription Department, at 508-970-3240, or from the Gallery. Prices realized will be available online at www.skinnerinc.com, both during and after the sale. The Skinner website enables users to view every lot in the auctions, leave bids, order catalogs and bid live, in real-time, through SkinnerLive!