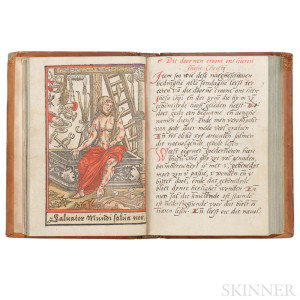 Featured lots include an important archive of Marc Chagall letters and documents, along with signed photographs, and inscribed copies of Chagall publications. The keystone of these lots is a Large Archive of Letters, 1964-1971 (Lot 13, Estimate $80,000-$120,000) documenting Chagall’s work with the Metropolitan Opera in New York, including the sets and costumes he designed for the Magic Flute, and the two iconic murals that grace the lobby.

Incunabula are represented in two lots, including a favorite of all book lovers: the Nuremberg Chronicle (Lot 222, Estimate $25,000-$35,000). Published in 1493 in large folio format, this ambitious project is illustrated throughout with almost 2,000 woodcuts. Its goal was to chronicle the history of the world from Genesis right up to contemporary times. The resulting images feature Bible illustration, portraits of kings and queens of ancient times, and numerous city views. The 1494 Venice edition of Ovid’s De Arte Amandi will also be offered  (Lot 196, Estimate $2,000-$3,000 ), along with an important post-incunabula edition of Raimundus Sabundus’s Theologia Naturalis, printed in Nuremberg by Koberger in 1502, in contemporary boards (Lot 211, Estimate $2,000-$3,000 ).

Many lots of decorative bindings along with collectors’ copies of first editions by Robert B. Parker, Sue Grafton, and Elmore Leonard, and a charming Dutch and Latin prayer book, circa 1500 featuring  hand-colored woodcuts (Lot 147, Estimate $2,000-$2,500) round out the books section. 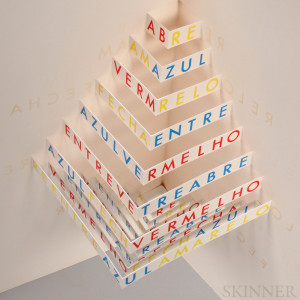 The account books of John Roberts III, a Pennsylvania Quaker executed for treason during the American Revolution (Lot 61, Estimate $6,000-$8,000), documenting goods and materials taken from him by the Continental Army during the conflict. The controversy surrounding his execution has persisted for centuries, with meager original documents available. This collection of unique source material has been unknown to scholars until now.

The shipping account books of Captain William Trotter (Lot 237, Estimate $12,000-$15,000) have been studied, but have never been available for sale. Seven volumes of Trotter’s ship’s logs from the late 18th and early 19th century document his voyages and observations in South America, the Far East, the Pacific Islands, the Northwest coast of North America, and elsewhere.  Hundreds of handwritten pages include detailed business transactions and fascinating ethnographic observations.

Americana collectors will find many interesting lots throughout the sale, including Hodder’s Arithmetic, the first book on math published in North America (Lot 169, Estimate $6,000-$8,000), with provenance connecting this copy to Myles Standish’s great-granddaughters. A folio copy of McKenney and Hall’s North American Indian Tribes, including all of volume one and a portion of volume two will also be included in the sale, featuring seventy-one full-color portraits of Native American Indian leaders (Lot 189, Estimate $8,000-$12,000). 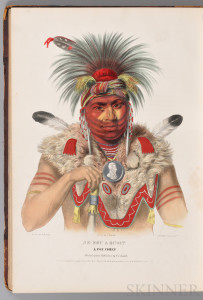 McKenney, Thomas (1785-1859) & Hall, James (1793-1868) History of the Indian Tribes of North America with Biographical Sketches of the Principal Chiefs. Embellished with One Hundred and Twenty Portraits from the Indian Gallery in the Department of War, at Washington. Philadelphia: Biddle, 1837; Philadelphia: Greenough, 1838.(Estimate $8,000-$12,000)

Catalogs are available online, from the Subscriptions Department, at 508-970-3240, or from the Gallery. Prices realized will be available online, at www.skinnerinc.com, both during and after the sale. The Skinner website enables users to view every lot in the auctions, leave bids, order catalogs and bid live, in real-time, through SkinnerLive!