BOSTON, MA – September 11, 2014 – Skinner, Inc. will host an auction of Fine Oriental Rugs & Carpets on Sunday, September 28, 2014 at 12PM in Boston, featuring over 300 lots of antique rugs, carpets, and textiles from the Caucuses, Persia, Anatolia, India, Central Asia, and China.

Notable lots include an early Shakhrisabz Suzani in excellent condition, a collection of early shawls, a “Star” Kazak, a first-rate group of 19th century furnishing carpets, and an early Chinese rug. Lawrence Kearney, Director of Fine Oriental Rugs & Carpets, said, “From room-sized rugs to accent carpets, the auction includes stylish finds in great condition. You can get art for your floor and furnish your home at a reasonable price point.” 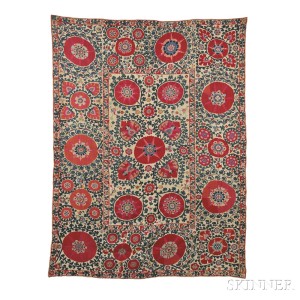 The early Shakhrisabz Suzani (Lot 183, estimated between $8,000 and $10,000) will command attention at the auction preview with its tremendous graphic appeal and extraordinary color. The original collector frequently traveled around the world, and bought this embroidery on one of her trips in 1912. Her family has kept it in storage – out of sunlight or regular use – during the hundred years since its original purchase, meaning that the piece has remained in excellent condition.

The auction also features a number of other important textiles, including a group of striking, early Kashmir shawls from North India. Most Kashmir shawls on the market were made in 1860 or later, but these examples come from the 18th and early 19th century. Two “Moon” shawls highlight the collection (Lots 118 and 124, each estimated between $3,000 and $4,000). Several important Mughal period panels will also be offered, including an end panel from the early 18th century (Lot 119, $2,000 to $3,000). 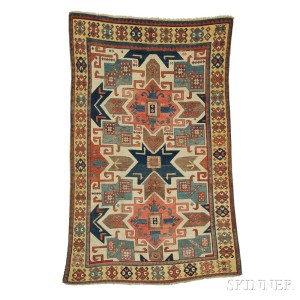 Many highlights of the auction come fresh to the market from estates, private collections, or museums, including a very early Chinese rug (Lot 149, $1,200 to $1,500) from the Smith College Museum of Art. Shahsavan and Veramin bags from a Virginia collection will also be offered. Built over three decades, the collection includes a pair of bags that were published in Sumak Bags of Northwest Persia and Transcaucasia by John T. Wertime and Richard E. Wright (Lot 112, $1,200 to $1,500). 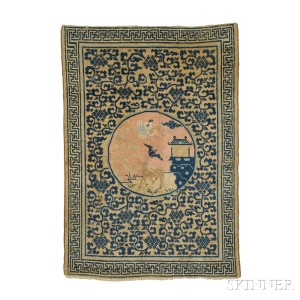 Please join Skinner for a reception and Gallery Walk to view highlights from the auction on Friday, September 26th at 5:30PM. The event is free and open to the public. Please RSVP to 508-970-3240 or events@skinnerinc.com.