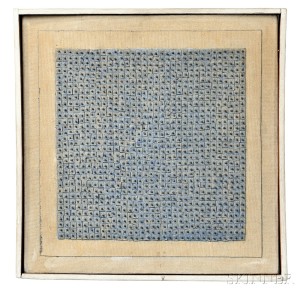 BOSTON, MA – May 13, 2015 – On May 29th, Skinner, Inc. will host an outstanding auction of American & European Works of Art, beginning with a superb range of prints and photographs at 12 P.M., followed by a strong grouping of fine paintings, sculpture, and drawings at 4 P.M. An accompanying online auction of Fine Art, covering sculpture, prints, paintings, and photographs, will take place from May 26 through June 1.

“This auction features a robust assortment of American works, with several fresh to market items that are sure to excite buyers,” said Robin Starr, Director of American & European Works of Art at Skinner. “The market is leaning toward modern and contemporary pieces, which is reflected in the fantastic offerings in this sale.”

American paintings are well represented in this auction, with the highest estimated lot by painter Agnes Martin. Titled Blue Flower, this 1962 piece is an early quintessential example of Martin’s work.Martin shifted to a Minimalist style based on grid-like structures beginning in 1958, so Blue Flower, with its subtle palette and squares of blue canvas, represents the beginning flourishing of her mature style.  The work is accompanied by identification labels from the Robert Elkon Gallery, the Institute of Contemporary Art, University of Pennsylvania, Philadelphia, and an unattributed museum label affixed to the back (Lot 397, estimated between $1.5 million to $2 million).

Many exceptional highlights come from private collections, including the Coast of Monterey by Thomas Moran, an exemplary painting depicting the California coast (Lot 249, $250,000 to $350,000). Like the Moran, a 1908 painting by William Glackens, A Cape Cod Shore, also descended through multiple generations of a collecting family (Lot 298, $250,000 to $350,000).

Pavel Tchelitchew‘s Annunciation, of 1931, also comes to the block from a private collection.  The composition is a Surrealistic depictionof the angel Gabriel standing behind the figure of Mary, all in the artist’s muted palette of blues and grays (Lot 325, $70,000 to $90,000). 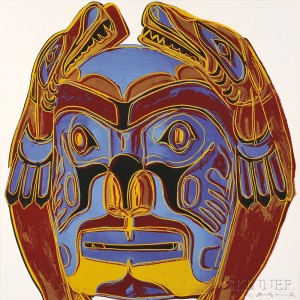 Fine prints by modern and contemporary masters, including pieces by Pop artists Andy Warhol, Roy Lichtenstein, David Hockney, and Claes Oldenburg, in addition to works by Jeff Koons, make up a large portion of this sale.

A stand-out Warhol offering is Northwest Coast Mask, from his Cowboys and Indians series (Lot 53, $10,000 to $15,000). This series, published in an edition of 250 features iconic images of Geronimo, Annie Oakley, and John Wayne, along with images of cultural objects such as kachina dolls, a Plains Indian shield, and this Northwest Coast mask probably made by the Kwakiutl tribe.

Another fantastic “pop” work is Cathedral #4 by Roy Lichtenstein, from his Cathedral series, created in homage to impressionist artist Claude Monet (Lot 31, $6,000 to $8,000). Claes Oldenburg’s 1969 Profile Airflow speaks to his characteristic approach to Pop Art in depicting mundane, everyday objects;,in this case a scaled-down version of a 1934 Chrysler Airflow (Lot 38, $15,000 to $20,000). 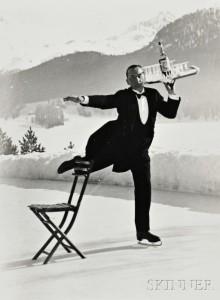 A solid grouping of works by European photographers, including Florence Henri, Dora Maar, and Joost Schmidt, can be found in this auction, with several examples from the Bauhaus and Surrealism movements.

Skinner is pleased to present an online auction of Fine Art, beginning Tuesday, May 26th at 12:00 P.M. with the first lot closing on Monday, June 1st at 4:00 P.M. This online sale represents the first time all categories – prints, drawings, paintings, sculpture and more – will be included in one online auction.

Bidders can participate at any time during the eight-day auction from the comfort and convenience of home, and have the added value of previewing the online-only lots in person during the regular Boston preview hours.