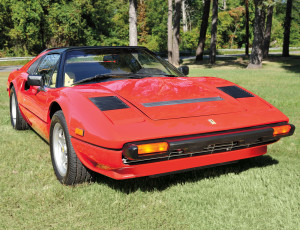 MARLBOROUGH, MA – October 11, 2014 – Skinner, Inc. will hold an auction of Clocks, Watches & Scientific Instruments on November 1, 2014 in Marlborough, MA, featuring European, American, and Japanese clocks. From enameled French mantel clocks to an impressive selection of tall clocks as well as antique and modern watches, the auction offers something for everyone with an interest in horology. In addition, the auction features antique vehicles and a selection of Historic Arms & Militaria.

A Clocks, Instruments & Militaria – Online auction will also be open for bidding from October 28th through November 4th, 2014.

Two red sports cars kick off the auction. Classic Italian design and strong sweeping lines make the Ferrari 1980 308 GTS a highly recognizable car (Lot 1, estimate $28,000 to $32,000). For American car aficionados, the 1957 Ford Thunderbird hardtop convertible is highly desirable (Lot 2, estimate $30,000 to $35,000). Jane Prentiss, Director of Antique Motor Vehicles, says, “Both vehicles are eye-catching and fun to drive, and the auction is just in time for the holidays.” 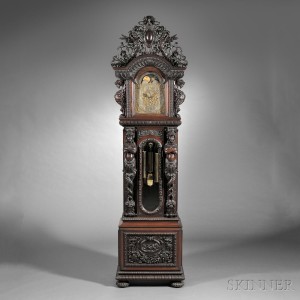 A masterpiece of Victorian clock-making leads an outstanding selection of tall clocks, also known as “Grandfather” clocks. The elaborately carved mahogany case is attributed to R.H. Horner & Co. of New York, and the dial is signed by Tiffany & Co. (Lot 447, Estimate $90,000 to $120,000). For over eighty years, the clock stood in the W.P. Brown mansion in New Orleans. It was there when Florieda Batson, captain of the first Woman’s World Games in Paris, 1922, moved into the home with her family in 1930. The Women’s World Games were a prelude to allowing women to compete in the formerly all-male Olympic games. Batson’s many silver trophies adorned the mansion along with the clock.

The auction features watches from the late 17th century through the modern day. A silver pair-cased verge watch (Lot 350, estimate $2,500 to $3,500) was made in London circa 1700, and an Omega Speedmaster stainless steel chronograph wristwatch is the same model that was approved by NASA for space travel and worn on the moon (Lot 379, estimate $1,000 to $1,500).

Mantel clocks, skeleton clocks, table clocks, and regulators will also be offered.  A gilt bronze and enamel mantel clock attributed to Brocot of Paris, c. 1860 (Lot 433, estimate $3,000 to $5,000) is a beautiful clock that survives with its glass dome intact.

A group of rare Japanese clocks (Lots 400 to 404, estimates vary) come to auction from a private collection. 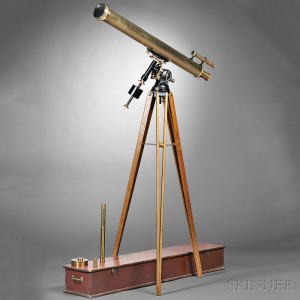 Don Yeier, an optical specialist, collected telescopes for forty years. Skinner will present a group of floor and library telescopes from the mid-18th century through the present day from his extensive collection. A reflecting library telescope by James Short of London (Lot 288, estimate $5,000 to $7,000) represents early optics, and a refractor telescope from the late 19th or early 20th century (Lot 299, estimate $15,000-$25,000) is an exceptional example by Alvan Clark & Sons of Massachusetts.

The auction also includes a collection of 18th to 20th century eyeglasses along with early chest and door locks, padlocks, and keys.

Over 350 lots of clocks, scientific instruments, and militaria will be offered online, beginning on October 28, 2014 at 10:00 AM. Lots will begin to close on November 4, 2014 at 4:00 PM. Bidders can participate at any time during the eight-day auction from the comfort and convenience of home, and have the added value of previewing the online-only lots in person during the regular Marlborough preview hours.

An illustrated catalog for Clocks, Watches & Scientific Instruments and a separate catalog for Historic Arms & Militaria are available from the Subscription Department, at 508-970-3240, or from the Gallery. Prices realized will be available online at www.skinnerinc.com, both during and after the sale. The Skinner website enables users to view every lot in the auctions, leave bids, order catalogs and bid live, in real-time, through SkinnerLive!