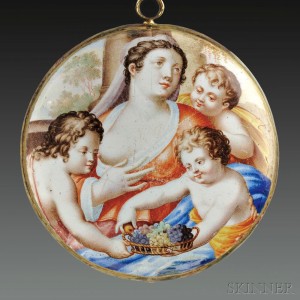 BOSTON, MA – April 7, 2014 – Skinner, Inc. will hold an auction of Clocks, Watches & Scientific Instruments on May 3, 2014, featuring early pocket watches, complex musical boxes, American clocks, cast iron banks, and rare scientific instruments. In addition, the auction kicks off with over 300 lots of Historic Arms & Militaria. An additional selection of over 200 lots will be offered online only from April 29 through May 6, 2014.

A very early, ornately enameled watch is sure to impress collectors (Lot 428, Estimate $6,000 to $8,000). The case was made in the mid-17th century, and the entire watch contains beautiful scenes in enamel including the death of Cleopatra. A late 19th century Hamilton & Co. triple complicated minute-repeating watch (Lot 442, Estimate $20,000-$40,000) features a perpetual calendar that gives the correct day of the month and week, including leap years. The watch is marked “London and Calcutta,” indicating that the high-end jewelry store Hamilton & Co. made the watch for the emerging market in India.

A John Fletcher two-day chronometer made in 1855 in London (Lot 456, $4,000 to $6,000) is a nice example of the fine chronometers available at very reasonable prices. These timekeeping devices helped navigators on sea voyages determine longitude, and kept accurate time even under adverse conditions such as extreme temperatures or rough seas. 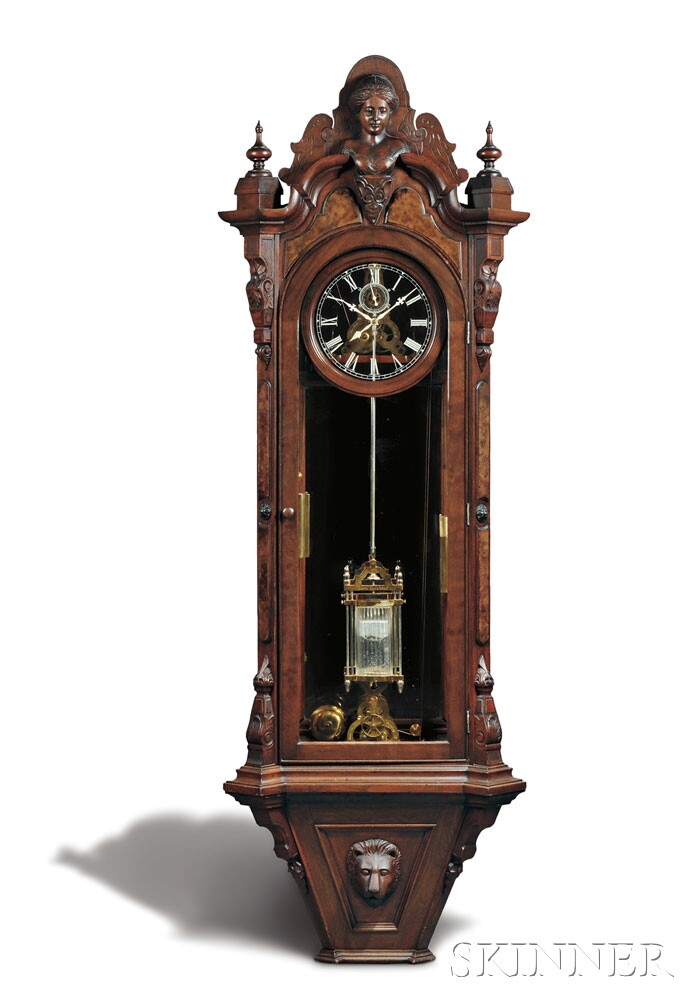 One of only three known timekeepers by Louis Bernhard will be offered (Lot 514, $30,000 to $50,000). Made in 1875 in Columbia County, PA, the clock features a mercurial pendulum that compensates for temperature changes. This clock is possibly the example described in J.H. Battle’s History of Columbia and Montour Counties, Pennsylvania as “a most elaborately finished case of black walnut, an astronomical clock of the most perfect workmanship… valued upwards of $500.”

Early tall clocks include a 1765 example by Nathaniel Mulliken of Lexington, Massachusetts (Lot  469, $10,000 to $15,000). The clock is in excellent condition with old, possibly original, finish and the dial has never been cleaned or re-silvered. “Other than cleaning the movement so the clock will run, I recommend doing nothing more to this fine example,” said Cheney. “This piece really is a remarkable time capsule.”

A shelf clock by John Munroe (Lot 497, Estimate $10,000 to $15,000) represents the work of the esteemed Munroe family of Concord. Cabinetmaker William Munroe, whose work was recently the subject of an exhibit at the Concord Museum, likely made the clock case, and Nathaniel Munroe probably made the movement and mechanical elements.

The famous Willard family of clock-makers is well-represented in the auction by a Benjamin Willard tall clock (Lot 471, Estimate $10,000 to $15,000) and a later Aaron Willard Jr. patent time piece, colloquially known as a “banjo clock.” (Lot 478, Estimate $7,000 to $9,000). Clocks by E. Howard & Company of Boston round out a substantial selection of fine New England timepieces. 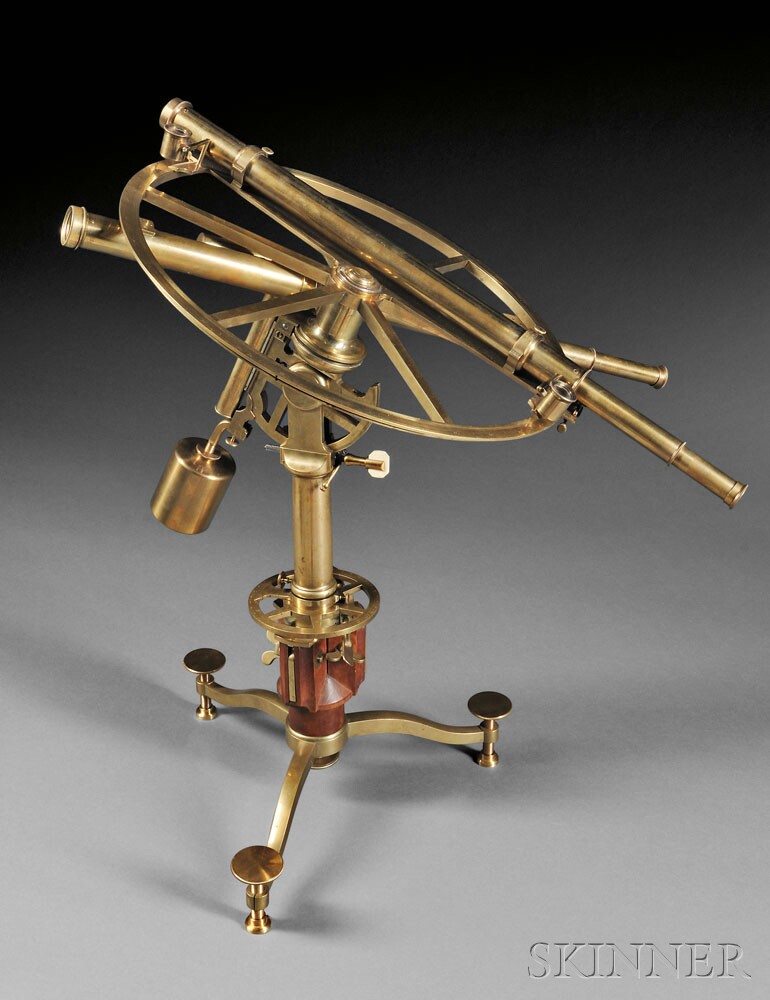 A rare August Lingke & Co. assayer’s kit (Lot 422, Estimate $2,000 to $4,000) and a very early brass repeating circle by Lennel (Lot 401, $15,000 to $25,000) hearken back to the age of exploration in the 19th century. The repeating circle is likely one of the first ever made; it was signed by Lennel’s widow after he passed away in 1783, and before she died in 1786. This expensive, state-of-the-art, precision instrument allowed surveyors to accurately determine distances while mapping the globe. Minor wear indicates that the instrument was probably not just a show piece – it likely made a contribution to science.

The auction also includes musical boxes, including examples with very complicated, intricate mechanisms. A Pallard & Co. interchangeable orchestral cylinder musical box (Lot 651, Estimate $6,000 to $8,000) includes six cylinders and an organ section, along with engraved bells, a drum, and a castanet.

A single-owner collection of cast-iron mechanical banks will also be offered.

Following on the success of the recent Clocks, Instruments and Militaria – Online auction in March, Skinner is pleased to offer an additional selection of over 200 lots for online bidding opening on April 29, 2014 at 10:00 AM ET. Lots will begin to close on May 6, 2014 at 6:00 PM ET. Collectors can bid at their convenience during these eight days on affordable clocks, watches, scientific instruments, musical boxes, militaria, and a collection of fountain pens. Bidders also have the added value of previewing the online-only lots in person during the regular Marlborough preview hours.

Previews for the auction will be held on Thursday, May 1, from noon to 5 PM, Friday, May 2, from noon to 7 PM., and Saturday, May 3, from 8 AM to 9:30 AM. Robert C. Cheney will present a lecture titled “The Pitfalls of Collecting Willard’s Patent Timepiece or ‘Banjo Clock’” on May 2, 2014 at 6:30 PM. An illustrated catalog for Clocks, Watches & Scientific Instruments and a separate catalog for Historic Arms & Militaria are available from the Subscription Department, at 508-970-3240, or from the Gallery. Prices realized will be available online at www.skinnerinc.com, both during and after the sale. The Skinner website enables users to view every lot in the auctions, leave bids, order catalogs and bid live, in real-time, through SkinnerLive!