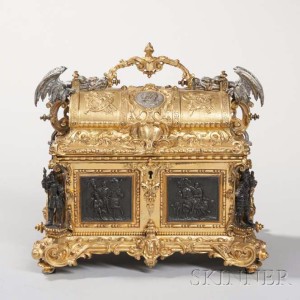 BOSTON, MA – Skinner, Inc. will present an auction of European Furniture & Decorative Arts & Fine Silver in its Boston Gallery on Friday, April 7 at 10AM. With over 650 lots on offer, the auction will feature an expansive selection of fine silver and European fine and decorative arts of the 16th through early 20th centuries.

The auction opens on Friday with just under 200 lots of fine silver, featuring a broad range of flatware and hollowware from the United States, England, and Europe. Pieces from the estate of Carol J. Ferranti are prominently featured and showcase her strength as a collector and her eclectic taste, with items ranging from the English Arts & Crafts movement to Tiffany “Vine” pattern flatware. Some highlights from her collection include a Liberty & Co. Cymric Bowl on Stand (Lot 24, Estimated between $8,000-12,000), an Indian Silver and Enamel Spice Box (Lot 66, $2,000-4,000), and a Gorham Sterling Silver Presentation Pitcher (Lot 103, $3,000-5,000). 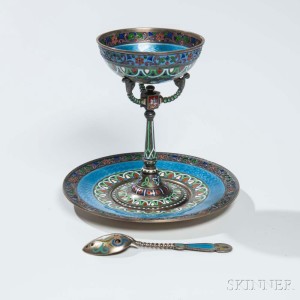 The April auction features a variety of fine furniture items including an assortment of American Aesthetic Movement pieces. A few standout offerings from this group include a handsome Renaissance Revival Overmantel Mirror with Pate-sur-Pate Plaque attributed to Marc Louis Solon (Lot 462, $2,000-3,000), a large and heavily carved Herter Brothers Walnut Sideboard, (Lot 515, $3,000-5,000), and an ebonized and inlaid Herter Brothers Anglo-Japanese style Bed and Vanity, which will appeal to both the antiquarian and more contemporary collector (Lot 453, $1,500-2,000). 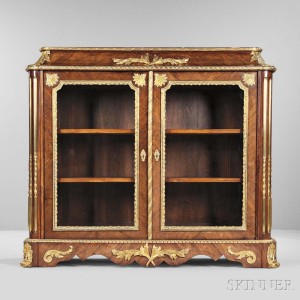 A number of French and French-styled pieces from the collection of a Beverly Hills gentleman are also featured in the auction, consisting of many lots of furniture as well as clock garnitures, candelabras, and over 20 porcelain plaques most by Konigliche Porzellan Manufaktur (KPM). Some highlights from this collection include a Napoleon III-style Tulipwood and Walnut Gilt-bronze Cabinet (Lot 587, $10,000-20,000), a Monumental Gilt-bronze Clock featuring a figural group modeled after the Heart of Henry II by Germain Pilon (Lot 577, $20,000-30,000), a Pair of Large Gilt-bronze-mounted Sevres Porcelain Vases and Covers (Lot 613, $8,000-12,000), and a KPM Porcelain Plaque with Depiction of Ruth (Lot 451, $3,000-5,000).

Previews for the auction are free and open to the public. Previews will be held in Boston on Wednesday, April 5 from 12PM – 5PM and on Thursday, April 6 from 12PM – 8PM. In conjunction with the Thursday evening preview, we will also feature a lecture by the Curator of Metals at Colonial Williamsburg Foundation, Janine Skerry, titled “Heavy Breathing and Plain White Paper, or How to Become an Expert on Antique Silver.” The lecture will begin at 6pm on Thursday, April 6th with a reception preceding the lecture at 5PM. RSVP ONLINE HERE.

Illustrated catalog 3000B is available from the Subscriptions Department at subscriptions@skinnerinc.com or from the Gallery. Prices realized will be available online at www.skinnerinc.com during and after the sale. The Skinner website also enables users to view all lots in the auction, leave bids, order catalogs and bid live, in real-time through SkinnerLive!