BOSTON, MA – September 23, 2013 – Skinner, Inc., internationally renowned auctioneers and appraisers of objects of value, will feature an extraordinary selection of treasures from China, Japan, Iran, and beyond during its Asian Works of Art auction on October 12. Over 500 lots will be offered during this fall sale, including exquisite jades, porcelains, silk embroideries, ivories, netsuke, and more. 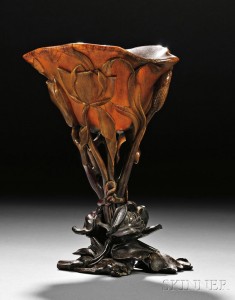 Among the highlights from China is the auction’s cover lot, an 18th century rhinoceros horn libation cup in beautiful condition (lot 185, estimated between $30,000 and $50,000). This important piece, consigned by a prestigious, small New England museum, depicts a hollowed out magnolia, the exterior sides carved with magnolia branches intertwined with lychee – symbolizing wishes for a rich and noble home with many sons. “Many prominent New England families and institutions amassed collections of Asian wares thanks to the China trade,” said Judith Dowling, Director of Asian Works of Art. “Skinner is particularly well-placed to bring such treasures, including this cup, to market.” 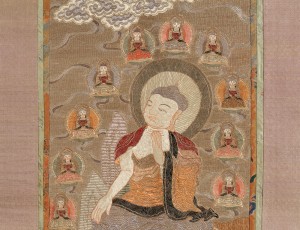 Porcelain is plentiful in this auction as well, exemplified by a large collection of blue and white Chinese pieces. Among them: a blue and white export candlestick from the late Ming dynasty, decorated with dragons chasing flaming pearls, amidst clouds (lot 380, $2,000 to $3,000).

Chinese embroidery is represented by several notable offerings, including an early Buddhist Textile Panel from the 18th or 19th century, depicting Western Paradise (lot 289, $4,000 to $6,000).

Sought-after screens from China will also be featured prominently in this auction. An outstanding example is a nine-panel porcelain inlaid, lacquered wood screen from the 19th century, showing the eight Daoist Immortals and Shoulao, the God of Longevity (lot 538, $20,000 to 30,000). 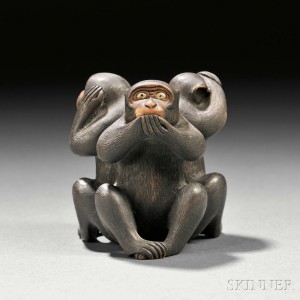 Japanese highlights include an attractive woodblock by printmaker Munakata Shiko, signed by the artist and dated 1956 (lot 125, $5,000 to 7,000). Titled, “Woman with Hawk,” the hand-colored print was consigned by the owner, who purchased it directly from Munakata in the 1950s.

A 19th century wood carving of the Three Wise Monkeys will also be offered, comprised of Mizaru, who sees no evil, Kikazaru, who hears no evil, and Iwazaru, who speaks no evil, sitting with their backs to one another (lot 75, $500 to 700).

As well, Skinner will offer several highly important pieces from Iran on October 12, the most exceptional of which is a Safavid-style papier-maché casket embellished with images of nightingales and rosebud branches (lot 6, $16,000 to $20,000). Dating to the 18th Century Qajar period, this ornate container was possibly used for perfumed powders. Also from the Qajar period is a lacquered mirror case with a miniature portrait (lot 10, $2,800 to 3,200) showing leader Imam Ali, holding the ceremonial sword and prayer beads, flanked by his two sons. “We’ve been seeing increased interest in fine Persian wares,” offered Dowling. “Skinner is pleased to bring these fine examples and others to market in this auction.”

Previews for the auction will be held on Thursday, October 10, from noon to 5 PM Friday, October 11, from noon to 7 PM., and Saturday, October 12, from 9 AM to 10:30 AM. Illustrated catalog #2678B is available from the Subscription Department at 508-970-3240. The catalogue is also available at the gallery. Prices realized will be available at www.skinnerinc.com during and after the sale. The Skinner website also enables users to view all lots in the auctions, leave bids, order catalogs and bid live, in real-time through SkinnerLive!