BOSTON, Mass. – March 15, 2013 – Skinner, Inc. today announced that its Fine Jewelry auction brought $2,532,640.50, more than a half million over the sale’s estimate high. Held this past Tuesday, March 12th in Boston, the results are further evidence of a trend toward consistently strong bidding for exemplary pieces.

Skinner is holding a consignment day at the Boston gallery, 63 Park Plaza, on Wednesday, March 20th. By appointment only from 10 a.m. to 6 p.m., department director Victoria Bratberg and members of her staff will provide verbal auction estimates for fine jewelry including gold, diamonds, gemstones, signed, and vintage pieces. While there is no obligation to consign, pieces will be considered for inclusion in one of Skinner’s upcoming fine jewelry auctions, held four times annually. Those interested may register for the event at https://www.skinnerinc.com/news/event/jewelry-consignment-day-in-boston/ 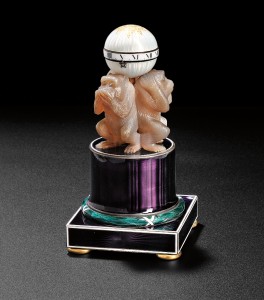 The auction’s cover lot, an early 20th century fine Edwardian carved agate and enamel pendulette by Cartier (lot 553) was the auction’s top selling lot. Smashing its pre-sale estimate high of $20,000, the clock brought $174,000. The stunning piece features a rotating ball dial with Roman numeral indicators and a rose-cut diamond star to indicate the time, set atop of the “Three Wise Monkeys,” two with rose-cut diamond eyes. Purchased at Cartier, Paris by Mrs. Charles B. Alexander, the piece descended to her daughter Mary Alexander Whitehouse and then to her daughter, the consignor.

Diamonds and pearls continue to inspire heated competition. Several of the sale’s highlights outperformed pre-sale estimates, including a natural pearl necklace (lot 535) which exceeded a high estimate set at $40,000 to achieve $120,000. Other strong results include a gray natural pearl and diamond pendant (lot 544), estimated at $30,000, which sold for $78,000, and an emerald intaglio, and Burma sapphire, brooch which sold $50,400. 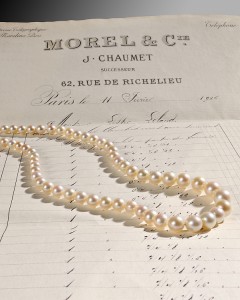