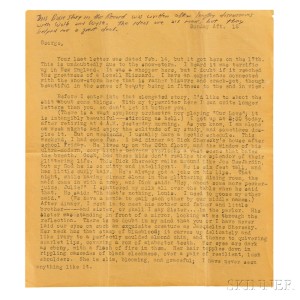 Skinner has the privilege to offer a group of newly discovered letters written by a teen-aged Jack Kerouac to a boyhood friend in Lowell, Massachusetts (lots 44 through 50, estimates vary). Entertaining, revealing, and personal, these letters show Kerouac beginning to define himself as an artist. In addition to the remarkable style and content of these engaging documents, Kerouac’s youthful hopes and doubts are palpable on the typewritten pages. Seen within the context of his future success, they create a compelling narrative. 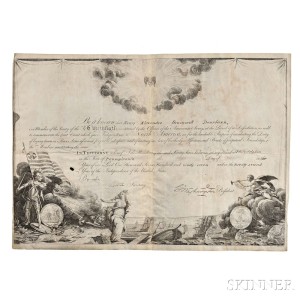 The books section will feature dozens of finely bound and well-preserved gold-tooled Portuguese bindings from the 18th and 19th century; many lots of fine and decorative sets; illustrated books; first editions; and other rarities. 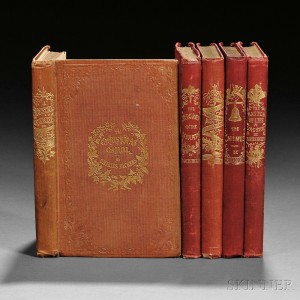 The works of Charles Dickens will be on the block in eleven lots that include a signed copy of A Christmas Carol (lot 203, estimate $20,000 to $30,000); complete sets of Dickens’s works; first editions in book form; and first editions of Little Dorrit, Nicholas Nickleby, and The Mystery of Edwin Drood in parts.

Titles in L. Frank Baum’s enduring Wizard of Oz series will be offered in ten lots, including some first editions in the original dust jackets (lots 419 through 428, estimates vary).

Last fall, a collection of railroad photographs taken by Andrew Russell brought $174,000 at Skinner’s fall auction. This year, Russell makes another appearance with his iconic “Golden Spike” image taken in Utah in 1869, when the eastbound tracks met the westbound tracks, uniting the continental U.S. with a continuous rail line (lot 470, estimate $15,000 to $17,000).

Early maps, fine prints, and limited edition artist’s books also make up an important portion of the auction. Audubon engravings from Birds of America include the loon and ruffed grouse.

Previews for the auction will be held on Friday, November 14, from noon to 7 PM, Saturday, November 15, from noon to 5 PM., and Sunday, November 16, from 9 AM to 9:30 AM. Illustrated Catalog #2764B is available from the Subscription Department, at 508-970-3240, or from the Gallery. Prices realized will be available online at www.skinnerinc.com, both during and after the sale. The Skinner website enables users to view every lot in the auctions, leave bids, order catalogs and bid live, in real-time, through SkinnerLive!