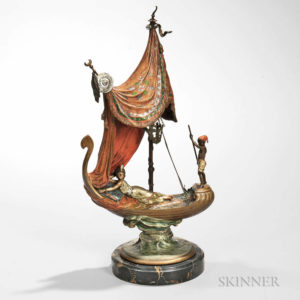 BOSTON, MA – Skinner, Inc. will present an auction of European Furniture & Decorative Arts in its Boston Gallery on Thursday, July 13 and Friday, July 14. With over 1000 lots on offer, the auction will feature an expansive selection of fine ceramics and silver as well as European furniture and decorative arts of the 16th through early 20th centuries.

The auction opens on Thursday, July 13 at 4PM with almost 300 lots from the Victor & Muriel Polikoff collection. The Polikoffs began collecting over 50 years ago and amassed an extensive collection that consists of 18th and 19th century Wedgwood and other early English ceramics, including Moorcroft, Turner, Doulton, Staffordshire, 18th century salt glaze and Whieldon ware. Some highlights from their collection include: 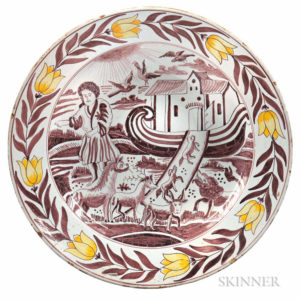 Session II of the auction begins at 10AM on Friday, July 14 and features over 700 lots of furniture, decorative arts, paintings, ceramics and silver. Additional fine ceramic offerings from session II feature almost 100 lots of Wedgwood from numerous fine collections including the Dr. Norman and Romaine Jacobs collection, the estate of Paul Lauer, and the Edward Knowles collection.  Several notable lots from this selection include:

Furniture and decorative art offerings in the auction span a range of styles and mediums with 40 lots of porcelain plaques many by KPM, a large group of Meissen “Blue Onion” pattern porcelain, as well as a strong selection of Art Nouveau furniture. Early English and Continental furniture also make a strong showing, with many pieces from Colonial Williamsburg from which the proceeds will be used by the Colonial Williamsburg Foundation, exclusively for the acquisition of art and antiques to be exhibited in its art museums and historic buildings. Other highlights for Session II include: 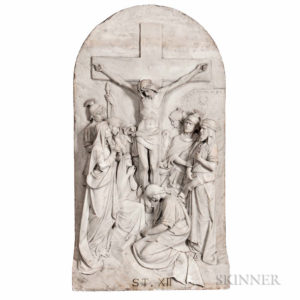 Perhaps the most impressive lot in the auction, however, is a Set of Fourteen Carrara Marble Stations of the Cross, probably by Joseph Sibbel Studios (Lot 589, $20,000-40,000) (to be previewed by appointment in the Marlborough MA gallery). The plaques were originally from the Immaculate Conception Church in Boston, which was dedicated on March 10, 1861, and designed by Patrick Charles Keely as the first church of Boston College. German-born American immigrant Joseph Sibbel (1850-1907) was often employed by Keely to work on a number of marble and plaster sculptures, altars, and Stations of the Cross. A similar group of Stations attributed to Sibbel and constructed in plaster are found at St. Joseph’s Church in Amesbury MA.

Friday’s auction concludes with nearly 200 lots of silver featuring a broad range of flatware and hollowware from the United States, Asia, and Europe. Prominently featured are almost 50 lots of Southeast Asian silver most from China or Japan as well as numerous offerings by American makers including Gorham, Tiffany, George Shiebler, and Dominick & Haff, including:

Skinner will also present a lecture by the former managing editor and current contributing editor of Ars Ceramica, Harwood (Woody) Johnson, titled Storied Wedgwood Collections and Stories about the Collectors. The lecture will begin at 6pm on Wednesday, July 12 with a reception at 5PM.