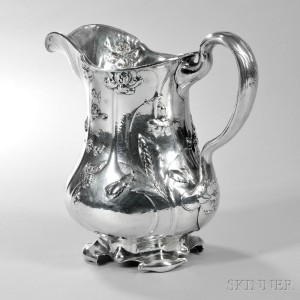 BOSTON, MA – Skinner, Inc. will present a two-part auction of European Furniture & Decorative Arts & Fine Silver in its Boston Gallery on Thursday, October 6 and Friday, October 7. With over 850 lots on offer, the auction will feature Part II of The Paul Lauer Collection of Wedgwood and The Edward Knowles collection of English Pottery, as well as an expansive selection of fine silver and European fine and decorative arts of the 16th through early 20th centuries. 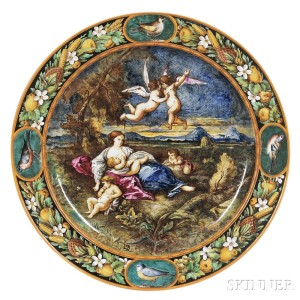 Session II opens on Friday, October 7 at 10AM with nearly 300 lots of English pottery and porcelain featuring an extensive amount of Wedgwood primarily from two collections: The Paul Lauer Collection and The Edward Knowles Collection. Together they cover the breadth of Wedgwood produced over a span of roughly 250 years. Black basalt offerings include Wedgwood and Bentley ornamental wares, and a number of encaustic decorated vases highlighted by an impressive 24-inch volute krater urn (Lot 211, $10,000-15,000) and a monumental Bert Bentley modeled vase (Lot 220, $10,000-15,000).  Jasper in a variety of colors is well represented with standouts including an impressive Apotheosis of Homer vase (Lot 308, $4,000-6,000) and two black jasper Portland vases: a John Northwood edition (Lot 311, $4,000-6,000) and a Thomas Lovatt edition (Lot 303, $3,000-5,000). Other Wedgwood offerings include examples in Queen’s ware, dry body wares, majolica, Victoria ware, carrara, a Thomas Allen designed Ivanhoe service, and an assortment of 20th century wares with examples designed by Daisy Makeig-Jones featuring a fairyland lustre lily tray (Lot 435, $3,000-5,000).

Sixty lots of plaques include examples in Wedgwood jasper and black basalt; featuring a large Thomas Allen decorated plaque (Lot 401, $3,000-5,000) as well as a variety of works by Emile Lessore and Minton. Minton pottery is exemplified by a set of seven art pottery studio plaques with depictions representing Shakespeare’s The Seven Ages of Man, designed by Henry Stacy Marks (Lot 466, $10,000-20,000). 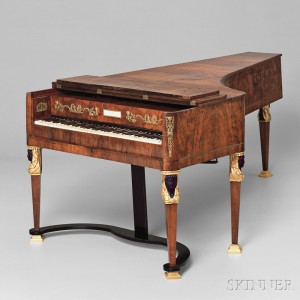 Previews for the auction are free and open to the public. Previews will be held in Boston on Wednesday, October 5 from 12PM – 7PM and on Thursday, October 7 from 12PM – 8PM. Illustrated catalog 2940B is available from the Subscriptions Department at subscriptions@skinnerinc.com or from the Gallery. Prices realized will be available online at www.skinnerinc.com during and after the sale. The Skinner website also enables users to view all lots in the auction, leave bids, order catalogs and bid live, in real-time through SkinnerLive!