MARLBOROUGH, MA – March 10, 2017 – An outstanding group of antique automobiles opens Skinner’s spring Clocks, Watches & Scientific Instruments auction on April 28 at 10AM in Marlborough, MA. The twelve automobiles on offer, produced between 1909 and 1963, will appeal to a broad range of discerning antique and special interest car collectors and enthusiasts.

Headlining the automobile offerings is a 1937 Cord 812 Phaeton (Estimated between $110,000-120,000). Famously designed by Gordon Miller Buehrig, the Cord 810/812 is regarded as the most distinctive and innovative automobile designs of the 20th century. Viewed as the ultimate in modern transportation due to its speed and streamlined design, the Cord was purchased by the wealthiest at the time, with a nearly endless list of famous owners. One of the most well-known being aviation pioneer Amelia Earhart, who was notoriously photographed in 1937 in front of her Cord 810 Phaeton with her Lockheed 10E Electra in the background. Approximately 3,000 Cords were made between 1936 and 1937, with production ceasing in 1937 due to financial hardship. 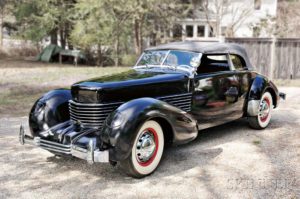 The Cord on offer has been on loan at the New England Air Museum for many years, and most recently exhibited under the wing at the Amelia Earhart (1897-1937) exhibit. It features 125 bhp, 90-degree, 288-cid V-8 engine with aluminum heads, and 4-speed transmission with vacuum electric shifting. The car is a nice driver with recent mechanical restorations. This classic black Phaeton with signature hidden headlights makes it a perfect driver for the show season.

The Eugene B. Bunce Collection

Ten out of the twelve vehicles offered hail from the estate of civil engineer Eugene B. Bunce, whose passion was restoring, driving and showing classic cars. He was a dedicated member of The Minuteman Model A Club, Maynard Area Auto Club, Central Massachusetts Model T Club, New England Vintage T-Bird Club and Early V8 Ford Club, as well as a contributing supporter of the Model A Ford Museum in Michigan. Mr. Bunce was also an avid inventor awarded with many U.S. patents and founder of Bunce Industries of Stow, MA. 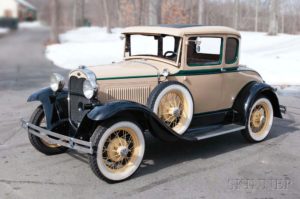 The auction will also feature 29 lots automobilia from The Bunce Collection, highlights include a Richfield gasoline and oil pump, a Model A Mitchell transmission, and a re-built Model A short block.

A slice of iconic 1950’s Americana, the Packard 250 Convertible ($26,000-28,000), is another standout auction highlight. The 250 was manufactured from 1951 through 1952 with just 9,841 examples produced, 4,640 of which were built in the first year. It shared the same basic body and wheelbase as the 200, but came equipped with Packard’s larger 327 cubic-inch 8-cylinder inline engine. The 250 model was specially designed to fill the absence of Packard having neither a hardtop nor convertible in its 1951 model range. 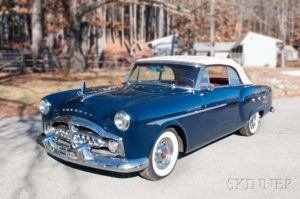 The Packard 250 on offer is in good running condition, featuring navy blue exterior paint, a white cloth top, classic red and white leather interior, and a ”Cormorant” deluxe hood ornament. The 1951 convertible is from the estate of Henry Snyder and will be sold to benefit The Shriners.

The buyer’s premium for automobiles is 15%.

Illustrated catalog #3003M is available from the Subscription Department at subscriptions@skinnerinc.com. Prices realized will be available at www.skinnerinc.com during and after the sale. Skinner’s website enables users to view all lots in the auctions, leave bids, and bid live in real-time through SkinnerLive!

Skinner auctions draw international interest from buyers and consignors alike, with material regularly achieving record prices. The company’s auction and appraisal services focus on fine art, jewelry, furniture, and decorative arts from around the globe, as well as wine, fine musical instruments, rare books, Asian art, clocks, and more. Monthly Skinner Discovery auctions feature a breadth of estate material. Widely regarded as one of the most trusted names in the business, Skinner appraisers have appeared on the PBS-TV series, Antiques Roadshow, since the show’s inception. Skinner has galleries in Boston and Marlborough, Massachusetts, as well as in New York City and Coral Gables, Florida, with bidders participating in person, by phone, and online. Join auctions live with SkinnerLive! and Bidsquare. For more information visit www.skinnerinc.com, find us on Facebook, or follow us on Twitter and Instagram.

2 thoughts on “Significant Collection of Antique Automobiles to Cross the Block at Skinner, April 28”