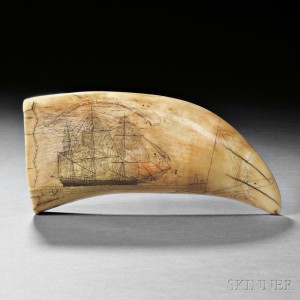 The October auction represents the last opportunity for bidders to purchase a piece from the finest and most comprehensive collection of early American iron ever assembled. Following the sale of Part I in August, Skinner presents more than 100 additional lots of these wonderful, simply-wrought kitchen implements. Standout items from the collection include scarce bronze posnets, such as one made by Austin & Crocker in Boston, 1793-94 (Lot 23, estimated between $8,000 and $12,000) and a posnet from Newport, RI, circa 1730 (Lot 25, $8,000 to $12,000). A number of rare measuring vessels (Lots 68 – 70, $1,500 to $3,000) represent early American copper.

Stephen Fletcher, Director of American Furniture & Decorative Arts noted, “This collection offers some of the best examples of 18th and 19th century iron tools. These utilitarian works are accessible, yet also quite beautiful, blending seamlessly with a modern design aesthetic.”

To learn more about the craft of ironwork, join us for a gallery talk on Saturday, October 25th at 12PM in Boston. Skinner welcomes back Derek Heidemann, owner of Resurrection Iron Works in Millbury, Massachusetts. RSVP to 508-970-3240 or events@skinnerinc.com. 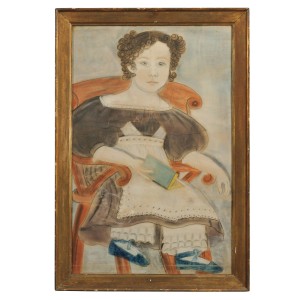 Skinner is pleased to offer a robust assortment of American paintings, including by three works by Thomas Chambers, each from a different period and offering a distinct glimpse into his skill. The artist’s New York Harbor (Lot 212, $12,000 to $18,000) stands out as a superb and early example of his work.

A number of folk portraits also highlight this section, including an early 19th century pastel and pencil portrait of a curly-haired, young girl wearing blue shoes (Lot 349, $4,000 to $6,000), as well as a pair of silhouette portraits of Spelman C. Bascom and Philena Ballard Bascom, by Ruth Bascom (Lot 356, $15,000 to $25,000). Bascom described their creation in her diary, which is currently housed in the American Antiquarian Society. House portraits are well-represented by a charming, 19th century portrait of a New England Federal brick house (Lot 342, $3,000 $5,000).

From 18thcentury Queen Anne and Chippendale furniture, to American classical works, the auction features a variety of furniture in very good condition by both unknown and celebrated cabinet makers. “Buyers will find remarkable value in these offerings,” noted Fletcher.

Nearly 50 lots of furniture and decorative arts from Ronnie Newman’s Danby, VT residence will be offered. Newman’s astute eye for good form and appreciation for original surface is evident throughout the collection. Examples include a small brown-painted cherry-carved chest, dating to the last half of the 18th century (Lot 162, $4,000 to $6,000) and an early 19th century painted chest (Lot 359, Estimate $3,000 to $5,000), featuring exuberant, original mustard and brown paint, designed to resemble exotic wood. 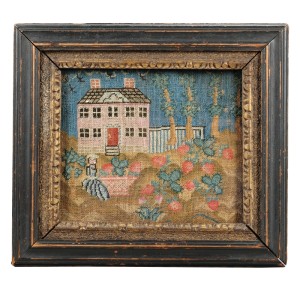 Additional highlights include several lots of rare 18th and 19th century miniature furniture, many from the Collection of the late Joan L. Thayer. From a tiny lift-top slant-lid desk (Lot 103, $600 to $800) to a miniature hutch cupboard, complete with diminutive pottery (Lot 104, $600 to $800), these children’s pieces will be sure to delight grown-up collectors of American furniture. Those who enjoy make-dos will be pleased to find an excellent grouping among Thayer’s collection (Lots 117 – 121, estimates vary).

Frederick Myrick of Nantucket carved a scrimshaw whale’s tooth depicting the Frances of New Bedford, c. 1828-29 (Lot 236, $150,000 to $250,000). Myrick is only known to have carved around 35 teeth, and this one is illustrated and discussed in the catalog raisonne of his work. The piece stands out in a selection of 19th century scrimshaw and other nautical offerings.

Over 200 lots of affordable, high-quality American paintings, antiques, and more will be offered during the Americana – Online auction, taking place October 20 through October 27. Bidders can participate at any time during the 7-day auction from the comfort and convenience of home, and have the added value of previewing the online-only lots in person during the regular Boston preview hours.