Boston, Mass. – January 18, 2013 – Skinner, Inc. will host an auction of American Indian & Ethnographic Art on February 9th in its Boston gallery. Skinner is proud to offer more than 200 lots of evocative Plains Indian artifacts, including four rare pieces collected by the Burr family in 1855-1857. The February sale also features the Joseph J. Rivera collection, the largest group of Southwest historic pottery ever offered at Skinner, and two rare Eskimo masks. 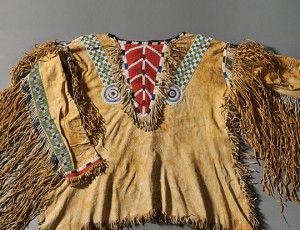 American Indian Pottery and Art from the Pueblos

The auction will offer excellent examples of pottery from almost every pueblo, from Acoma to Zuni. This represents the largest group of historic Southwest pottery Skinner has ever offered, with pottery from two major collections. Highlights include several Zuni frog jars, an exquisite Zia storage jar attributed to Harviana Pino Toribio (lot 406, $15,000 to $25,000), an unusual Tesuque painted pottery jar (lot 444, $3,000 to $4,000), and a Santo Domingo polychrome olla (lot 400, $1,500 to $2,000).

The pueblo tribes made kachina dolls to teach young people about their pantheon of gods. A group of fine Southwest polychrome carved wood kachinas features a large Hopi kachina representing Shalako (lot 308, $5,000 to $7,000).

Three rare and beautiful Eskimo masks will be auctioned, including two fine Yupik masks (lots 266 and 267, each estimated at $15,000 to $20,000). One mask shows a bird head on top of a circular human-like face, and the second depicts a face framed by stylized animal ears. The mask with the bird head, lot 266, descended in the family of Gustaf Osterberg, Chief mate on the US Coast and Geodetic Survey ship Yukon. Osterberg made at least five trips to the Alaskan coast starting in 1913, and possibly collected the mask on Nunivak Island.

The auction also includes a fine painted wood Tlingit finial, once in the Paul Rebut collection (lot 289, $25,000 to $35,000) and other excellent examples of Northwest Coast art.

View the catalogue for #2636B online at www.skinnerinc.com. Prices realized will be available online during and after the sale. Skinner’s site also allows users to leave bids, order catalogues, and bid live in real-time through SkinnerLive! Like us on Facebook at http://www.facebook.com/skinnerauctions.