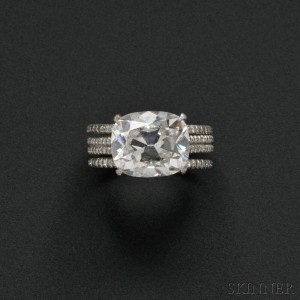 Rare Picasso Works to Appear at Auction for the First Time

Skinner continues its tradition of spotlighting artist jewelry with three scarce, early jewelry pieces by Pablo Picasso – each on the market for the very first time.

Early in his career, in the 1950s, Picasso made a series of one-of-a-kind jewelry pieces, most likely cast in the south of France with the assistance of his dentist, Dr. Chatagnier. He gave three of these pieces to Françoise Gilot, the mother of two of his children, Claude and Paloma Picasso. Gilot later passed the jewelry on to Carole Mallory, who was engaged to Claude at the time, and the jewelry has been in Mallory’s possession ever since.

The most important of the Picasso offerings is a sculptural, Silver “Satyr” Pendant (Lot 184, estimated between $15,000 and $20,000), featuring the familiar satyr motif which appeared across Picasso’s works.

Gloria Lieberman, Vice President at Skinner, Inc. observed, “The Picasso offerings in this auction are truly special. Not only do these pieces exhibit an experimental style by the artist, they are all one-of-a-kind, in contrast to Picasso’s editioned jewelry.”

The remaining jewelry of a single owner collection of Buccellati pieces will be up for auction, following the successful results from the first selection sold at Skinner last December. Victoria Bratberg, Director of Fine Jewelry at Skinner noted, “We are pleased to offer such a strong grouping of Buccellati jewelry, with all pieces in excellent condition, which is quite nice.” Highlights include an 18kt Gold “Hawaii” Necklace (Lot 548, $5,000 to $7,000) and an 18kt Gold and Emerald “Macri” Bracelet, (Lot 541, $6000 to $8000). 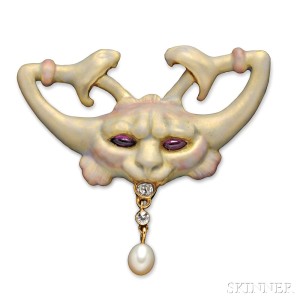 Skinner will offer two remarkable pieces of Art Nouveau jewelry from the Collection of Rita Goodman. One is an intriguing Art Nouveau 18kt Gold, Opal, and Demantoid Garnet Necklace (Lot 378, $20,000 to $30,000), purchased by the consignor in France in the late 1960s and featuring a striking, serpentine design. The necklace’s maker remains a mystery to this day. From the same collection is an Art Nouveau 18kt Gold, Enamel, and Diamond Brooch, Attributed to Boucheron, France, c. 1900 (Lot 377, $8,000 to $10,000), designed as a jackal’s head, crowned with the heads of two serpents.  A similar example is pictured in Boucheron: Four Generations of a World-Renowned Jeweler, by Gilles Néret.

Several charming figural works by Cartier will be offered, including a Whimsical Gold Gem-set Figural Brooch, New York, 1965 (Lot 552, $25,000 to $35,000) designed as a cowboy wearing flaring gold chaps, playing a diamond-set guitar. For the golf lover who appreciates fine jewelry, Cartier’s 18kt Gold, Chalcedony, and Diamond Figural Brooch, France (Lot 553, $3,000 to $5,000), designed as a bag of golf clubs with single-cut diamond mêlée is sure to excite. Another eye-catching offering by the same maker is an 18kt Gold, Coral, and Diamond Figural Brooch, (Lot 551, $3,000 to $5,000), designed as a park bench with a pair of coral and rose-cut diamond hearts.

Carole Mallory, consignor and author of Picasso’s Ghost (A Love Story), will present a lecture at Skinner titled “Uncovering the Mystery of the Picasso Jewels” on Monday, March 17, 2014 at 6PM. The event is free and open to the public.

Previews for the auction will be held on Sunday, March 16, from noon to 5 PM and Monday, March 17, from noon to 7 PM. Illustrated Catalog #2711B is available from the Subscription Department, at 508-970-3240, or from the Gallery. Prices realized will be available online at www.skinnerinc.com, both during and after the sale. The Skinner website enables users to view every lot in the auction, leave bids, order catalogs and bid live, in real-time, through SkinnerLive!