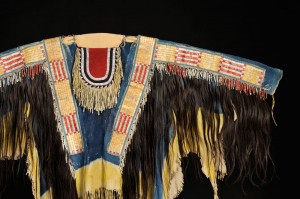 An exceptional Sioux Beaded and Quilled Hide Shirt from the Charles Derby collection represents the auction’s top lot (lot 199, estimated at $150,000 to $250,000). This beautiful, pre-reservation shirt from a Western Sioux tribe, dated from the third quarter of the 19th century, features symbolic blue and yellow paint with hairlocks down the entirety of both sleeves. Douglas Deihl, Skinner’s Director of American Indian & Ethnographic Art, noted, “The November 9th auction will draw collectors of Plains Indian art thanks to many fine examples of pre-reservation material, including this extraordinary shirt.”

Over 100 additional lots of Plains material will be available, including a Plains Beaded Buffalo Hide Mirror Bag from the Charles and Valerie Diker Collection of American Indian Art that was previously displayed at the Smithsonian Institution. (lot 153, $12,000 to $16,000). Skinner is also pleased to offer a Plains Pictorial Beaded Buffalo Hide Blanket Strip, c. 1870 (Lot 205, $20,000 to $30,000), from the Charles H. Heyl, II collection. This attractive piece features three multicolored sawtooth-edged rondels and four stylized antelope pronghorns on a light blue background. 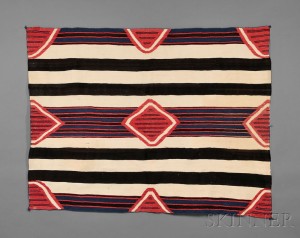 The auction will also feature a wonderful selection of pottery, including two items from Southwestern pueblos: an Acoma Four Color Pottery Jar from the late 19th century (lot 365, $1,500 to $2,000) and a Zia Four Color Storage Jar that features two stylized birds and abstract florals, circa 1930s (lot 371, $25,000 to $35,000). Deihl observed, “I am particularly excited by the pottery offerings in the November 9 auction. While it’s relatively small, it’s arguably the best group we’ve presented to date.”

Notable textiles from the Western Coast of the United States include a classic Northwest Coast Chilkat Blanket (lot 277, $40,000 to $60,000), dating from the last quarter of the 19th century. Made of woven mountain goat wool and cedar bark, the design incorporates animal parts relating to a clan’s crest animal.

Important Navajo textiles will also be offered, including a Classic Navajo Man’s Wearing Blanket (lot 345, $30,000 to 40,000). This Chief’s blanket features indigo blue and cochineal red dyes, making it a very valuable item. In 2011, an earlier Navajo Chief’s blanket with indigo and cochineal dyes sold for $213,000 at Skinner – to the great delight and surprise of the consignor.

A small selection of quality basketry will be offered, including a beautiful Northern California utility basket, a Pomo Twined Burden Basket (lot 388, $1,500 to $2,000). 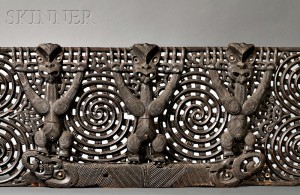 Additional auction highlights include an exceptional Maori Carved Wood Door Lintel created in the 19th century by the New Zealand-based people, to be placed over the door of a meeting house (lot 102, $20,000 to $30,000). Another lintel, possibly by the same maker, is currently in the collection of the British Museum. .

An exceptional Northeast Carved Wood Belt Cup will also be offered (lot 245, $25,000 to $35,000). This beautifully carved piece would have been attached to one’s belt when canoeing, in order to quickly dip the cup in the river for a drink of water.

A great collector’s item, an 11-foot Haida Carved Wood Totem Pole attributed to John Cross, circa 1900, will also be featured (lot 282, $20,000 to $25,000). The top figure on the totem pole most likely represents Wasgo or the Sea Wolf, holding a whale it its mouth; below this is a human face with a raven beak, followed by two bears – one holding a human, the other holding what appears to be a frog in its mouth.

According to Douglas Deihl, “The November auction features an eclectic mix of rare and important items from America and beyond. There truly is something for everyone.”

Previews for the auction will be held on Thursday, November 7, from noon to 5 P.M., Friday, November 8, from noon to 7 P.M., and Saturday, November 9, from 8 A.M. to 9:30 A.M. Illustrated Catalog #2685B is available from the Subscription Department, at 508-970-3240, or from the Gallery. Prices realized will be available online, at www.skinnerinc.com, both during and after the sale. The Skinner website enables users to view every lot in the auctions, leave bids, order catalogs and bid live, in real-time, through SkinnerLive!