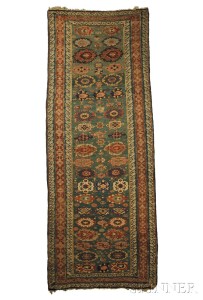 Mr. Kearney comes to Skinner with a distinguished background in the world of textiles, as a well-respected dealer of more than 30 years, and in letters, as an American poet of note. He is assisted by Erika Jorjorian, a textile artist with academic training in applied arts and art history.

“Many of the offerings in this auction not only demonstrate tremendous artistry, they possess great value as decorative pieces and are historically compelling. It’s like an opportunity to purchase a small piece of the Silk Road,” said Kearney of his debut sale.

From the Collection of Grover Schiltz

The auction begins with 47 rugs and textiles form the Grover Schiltz collection, which are offered without reserve, and represent 50 years of inspired collecting. This extensive assortment is informed by Mr. Schiltz’s taste for exceptional, artistic pieces, and most are in original condition.

An indicative piece from the Schiltz collection is the Soumak Long Rug (Lot 28, $2,000 to $2,500), a rare, well-preserved mid-19th century rug reflective of an earlier design tradition. Superb folk art elements are featured alongside a conscious use of space and a scarce, light green field color, punctuated with ivory, gold, red, deep blue, and salmon.

Another highlight is a 19th century Turkoman Yomud Asmalyk (Lot 145, $12,000 to $15,000), with a lattice of finely drawn “ashik” guls below a wedding procession of camels, figures on foot and horseback, with the bridal litter at the center. “There are very few known examples with a representation of the bridal procession on the Asmalyk itself. One doesn’t often encounter folk art of this caliber in Turkoman weaving, this is a rare find.”

One of the top lots of the sale is the well-preserved, as-found, mid-19th century Bakshaish Carpet from Northwest Persia (Lot 121, $15,000 to $18,000). This unusually small carpet (7 ft. 2 in. by 6 ft. 1 in.), with numerous silk highlights features a large, powerful, light blue medallion on an ivory field. Such extensive use of silk is rare for a rug from this region, suggesting it may have been a piece commissioned by a local notable. 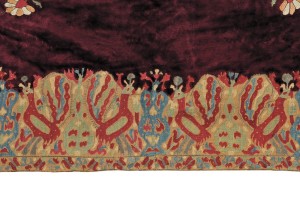 One particularly beautiful and important textile on offer is an early 18th century Epirus Greek Island Embroidery (Lot 139, $5,000 to $7,000), which was made for a young woman’s dowry. According to Kearney, “To find a complete embroidery of this age and caliber, and not merely a fragment, is very unusual. Typically, silk embroidery rarely survives intact on linen this fine.”

Also featured is an 1830’s  Kashmir Moon Shawl, (Lot 132, $2,000 to $3,000), highlighted by the circular center medallion inset with a pattern of hooked vines and flowers upon an ivory field.  Skinner, consistently offers quality material in this category, and holds the record for the sale of a moon shawl at auction, having sold a Kashmir Moon Shawl in 2012 for $59,250.

Previews for the auction will be held on Thursday, March 20, from 2 to 5 P.M., Friday, March 21, from 2 to 7 P.M., and Saturday, March 22, from 9 A.M. to 10:30 A.M. A Gallery Walk will also take place on March 21 at 6 P.M. Illustrated Catalog #2713B is available from the Subscription Department, at 508-970-3240, or from the Gallery. Prices realized will be available online, at www.skinnerinc.com, both during and after the sale. The Skinner website enables users to view every lot in the auctions, leave bids, order catalogs and bid live, in real-time, through SkinnerLive!