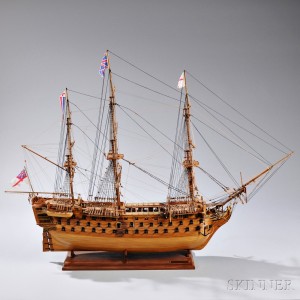 This online-only auction will open for bidding on Wednesday, June 1 at 12 PM and conclude on Thursday, June 9 at 10AM.

A Collection Built Through Generations

The consignor’s family settled in Jamestown in the 17th century and was involved in the shipbuilding trades. They became owners of small shipbuilding firms, and then managers and principals of larger shipping enterprises by the 19th century. By the early 1900s, they were members of some of the Eastern Seaboard’s best-known and prestigious yacht clubs: Annapolis, New York, and Seawanhaka Corinthian Yacht Club. Throughout, they were interested in (and successful at) gathering artifacts from the rich naval and maritime histories of England and America. As their reach and social circles expanded, so did their ability to collect. 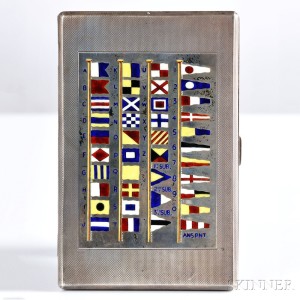 Standout lots in the auction include an illustrated logbook drawn and recorded by Captain Nicholas Pocock on the 1770s voyage of the Minerva from Bristol to Nevis (Lot 1003, estimated between $3,000 and $5,000), each day’s entry with a watercolor sketch of the Minerva and the condition of the sea; and a bound collection of manuscript transcripts of Admiral Nelson’s Fleet Logbooks from the Battle of Trafalgar, October, 1805 (Lot 1014, $3,000-$5,000). Though likely copied in the 1830s, it is a rare record of one of the most famous naval battles in history. The transcriptions describe maneuvers, battle damage, the death of Admiral Lord Nelson, and the aftermath of the Battle of Trafalgar.

Scrimshaw and other sailor-made arts are represented well – with nice examples of carved whale’s teeth, whalebone and baleen busks, ropework, and other whimsies. 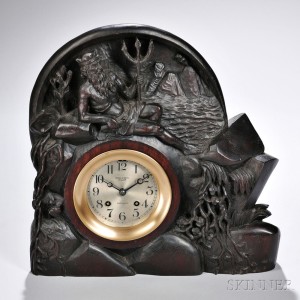 The auction features five lots of clocks, headlined by the so-called “Neptune Chelsea,” a brass clock retailed by Riggs Brothers in Philadelphia, with an elaborately carved walnut case featuring the god of the sea (Lot 1214, $4,000-$6,000).

Also of note is a large collection of half-hull and full ship models. The half-hulls feature 19th century examples of steam and sail-powered vessels including two large side-wheelers. The fully rigged ship models are all exactingly constructed by Jim Martin in the late 20th century, and represent some of the most famous ships in naval history – the Sovereign of the Seas, the Constitution, the Cutty Sark, the Swedish ship Vasa, the Schooner Blue Nose, Sir Francis Drake’s ship the Golden Hind, and more.

Modern yachting and yacht-racing Items include an America’s Cup pennant which reportedly flew from the mast of Stars and Stripes II in 1987 (Lot 1363, $600-$800), and famed yachtsman Jock Sturrock’s coveralls which he wore while skippering the Dame Pattie, an Australian racing yacht which competed for the 1967 America’s Cup (Lot 1361, $800-$1,200). There are several yachting trophies from the early 20th century, and groups of items relating to two vessels owned by the Roosevelt family – the 12-meter yacht Constellation and the 1930s Schooner Mistress.

Previews for the auction are free and open to the public. Previews will be held in Boston on Sunday, June 5 from noon to 5PM and on Monday, June 6 from noon to 7PM. Illustrated catalog 2900T is available for download or viewing online at www.skinnerinc.com. Prices realized will be available online at www.skinnerinc.com during and after the sale. The Skinner website also enables users to view all lots in the auction, leave bids, order catalogs and bid live, in real-time through SkinnerLive!