Among the notable lots being offered are rare Panamanian banknotes from the short-lived 1941 administration of Arnulfo Arias.

These denominations are especially prized. Almost all examples of the series, Panama’s first paper currency, were destroyed when President Arias was deposed seven days after the printing.

Other rarities include a $2 United States silver certificate of 1896 (Lot 1520, estimate $6,000-8,000). This uncirculated note with exceptional color is one of the “educational series,” considered by many to be the most beautiful notes ever printed. 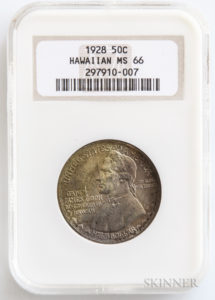 A splendid coin of historic interest is the Hawaiian Commemorative half dollar, 1928 (Lot 1078, estimate $3,000-5,000). It bears the portrait of Captain James Cook and was issued for the 150th anniversary of his landing in Hawaii. Fewer than 11,000 examples were minted, and the coin became very scarce almost immediately after its issue.

The Leiden Siege Money 5 Stuivers Paper Coin (Lot 1215, $200-300) is a poignant piece of history. Some of the hardest-fought battles of the Eighty Years’ War in Europe occurred between the Dutch and the invading Spaniards. In 1574, during the siege of Leiden by the Spanish, the Dutch produced these paper coins. Metal of all kinds was in short supply and desperately needed for the war effort, so coins of paper were made in the dies that had been used for metal coinage.

Copper coins now known as Conder tokens were another ingenious response to a shortage of metal currency. (Lots 1249-1264, estimate $20-40 each). These pennies and halfpennies were produced in the English provinces in the 1780s and 90s because there was a severe shortage of small coins, especially in the countryside. The British government had stopped minting the smallest, and most popular, denominations.

Many private companies with access to copper started to make their own coins, which were readily accepted and widely circulated for about ten years.

This auction will be held online only. It offers an excellent opportunity to bid at leisure and to acquire items of numismatic interest and importance from a leading auction house of impeccable reputation.