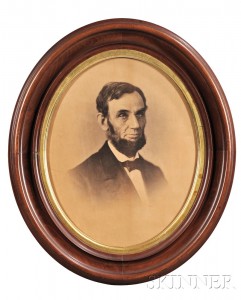 The large photographic portrait of Abraham Lincoln taken by Alexander Gardner (lot 35, $20,000 to $30,000) descended through his personal secretary John Hay, who was present when the picture was taken in August of 1863. The large image is especially striking in its oval gilt and mahogany frame.

An unassuming receipt (lot 46, $2,000 to $3,000) signed by Thomas Jefferson’s grandson in 1829 draws attention to a disturbing chapter in American history. Thomas Jefferson Randolph attempted to settle his grandfather’s estate, which was greatly in debt at the time of the former President’s passing. In this instance, he has sold Moses Gillette, an enslaved man owned by Jefferson’s estate at Monticello, for $545. Gillette, a skilled cooper who sold his wares back to Monticello, eventually did secure freedom, and moved to Ohio to be closer to his brother, Israel Gillette Jefferson.

An engaging letter (lot 5, $3,000 to $4,000) in the hand of Louisa May Alcott sorts out the last publication details regarding Little Women on the way to the first publication. Alcott writes to her editor, Samuel Niles, concerning the illustrations, subtitle, and illustration credit for the book. She also shows her own enthusiasm and verve as she notes that she is writing while holding her small nephew on her lap, “recovering from a tumble. […] [H] is gambols are not conducive to elegance of handwriting.” The first edition of both parts of Little Women is also offered in the sale (lot 62 $2,000 to $3,000).

Mark Twain holds a book on his lap and wears a dark suit and bow tie in the signed photograph offered in the June 1st sale (lot 54, $6,000 to $8,000). The large-format portrait in period oak frame evokes the unmistakable author as he appeared in 1905.

The cover lot is an image from Catherwood’s Views of Ancient Monuments in Central America, Chiapas, and Yucatan (lot 94, $15,000 to $20,000), a first edition from 1844, illustrated with two dozen hand-colored lithographic plates of Pre-Columbian ruins recently discovered in the rain forests of Central America. On a similar topic, McKenney and Hall’s History of the Indian Tribes of North America (lot 249, $5,000 to $7,000) is offered in the second octavo edition, illustrated with 120 hand-colored plates, in three volumes handsomely bound in full gilt-tooled red morocco.

A group of Middle Eastern manuscripts, including prayer books, manuscripts, Qur’ans, poetry, and other works in Armenian, Arabic, Persian, Coptic, Turkish, and other languages are also drawing favorable attention from potential bidders.

A milestone of theological publication and a coveted high-spot for Bible collectors, the first published edition of the Latin Bible with commentary (the Glossa Ordinaria) from the 1480s will be on offer (lot 77, $40,000 to $60,000), bound in four large folio volumes, with illuminated initials. A rare Jacobean psalm book in English from 1625 (lot 332, $1,000 to $1,500) is notable for its original memento mori silk embroidered binding, still intact after more than 375 years, worked with metallic and silk embroidery thread, and embellished with sequins.

The first English edition of Grimm’s Fairy Tales, illustrated by Cruikshank presents well in a two-volume set in a state of excellent preservation, in leather bindings by Riviere (lot 182, $3,000 to $5,000). An inscribed first octavo edition of Audubon’s Birds of America in seven volumes will be offered at the sale (lot 406, $35,000 to $55,000). The work, illustrated with 500 full-color images of North American birds is a landmark in the study of ornithology, and inscribed copies are rarely presented on the market. The sale will also include a group of approximately forty imperial folio prints of Audubon quadrupeds, a first edition of the octavo quadrupeds set (lot 407, $5,000 to $7,000), and several folio bird prints.

A striking hand-colored engraving of a tomato in fruit from Besler’s Hortus Eystettensis (lot 417, $900 to $1,200) invites thoughts of summer harvest, while the sale of original artwork for several New Yorker cartoons from the 1960s allow collectors the opportunity to own something unique from a favorite American literary publication (lots 425-430, estimates ranging from $600 to $1,500).

An illustrated catalog for sale # 2658B is available by mail from the subscription department at 508-970-3240. It is also available at the gallery.