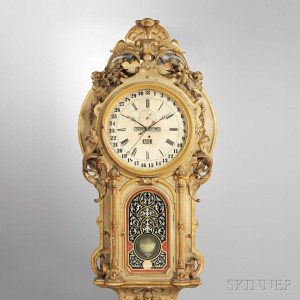 MARLBOROUGH, MA – Skinner, Inc.’s upcoming auction of Clocks, Watches and Scientific Instruments will be held in their Marlborough gallery on October 28 at 10AM. The auction includes timepieces from around the world, of all sizes and ages and materials, and in a dizzying array of forms.

Included are tall case, gallery, wall and skeleton clocks; table, bracket, regulator, carriage and mantel clocks—dozens of distinctive clocks and watches, something for every taste and checkbook.

Robert Cheney, Director of Clocks, Watches, and Scientific Instruments, notes that this auction includes a very large group of early clocks from what Cheney calls “the golden age of horology.” This period from 1690 to 1725 was an era of competition and innovation, exemplified in many offerings.

Especially notable is Lot 605 (estimated between $15,000-25,000), a seaweed marquetry long case clock. By master London clockmaker Michael Knight, it dates from about 1700 and is exceptional in several ways.

The elaborate wooden case is eye-catching and in excellent condition. Eight feet high, it is imposingly tall in order to house the complicated mechanism required for the movement to run for thirty days. It is a very early example of the thirty-day clock, the work of a well-known and technically accomplished maker.

Lot 718 ($25,000-45,000), described as a “Monumental carved and gilded perpetual calendar wall clock,” is predicted to be another high point of the sale. This elegant giant, seven feet tall with a two-foot diameter dial, dominated the lobby of the Grand Union Hotel in Saratoga Springs, New York, for almost a century.

The perpetual calendar clock was made in Hartford, Connecticut circa 1855, with a sophisticated mechanism that displayed not only the time but also the day of the week, month and year.  Four different patents, of which copies will be made available to the purchaser, are related to this timepiece. 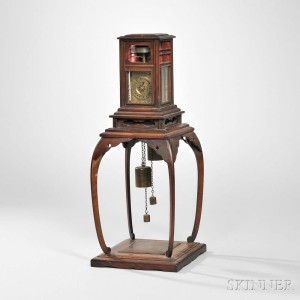 This auction also includes twenty Japanese clocks and watches, an unusually large number for a single auction. Clock consultant Paul Dumanowski notes that Japanese 19th century timepieces were not technologically innovative compared to their Western counterparts, but they have great aesthetic appeal and cultural interest.

In 1844, the Japanese calendar was revised to incorporate different hour lengths for different seasons of the year. Their shoken dokei or pillar clocks were designed to reflect this flexible time-keeping system, with adjustable time indicators instead of a western-style clock face. Lot 698 ($15,000-20,000) is an unusual example of the pillar clock, incorporating a striking mechanism which is rare in this form.

Lot 702 ($5,000-7,000) is a dai tokei or lantern clock, so called because it resembles the rectangular European clock style of that name. This example is notable for its relative technical complexity and its graceful carved wooden stand. 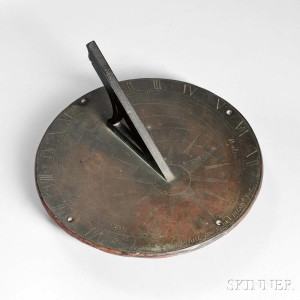 Before mechanical timekeeping, there were sundials. Clock and watch specialist Jonathan Dowling points to Lot 960 ($3,000-5,000), a particularly interesting example in this sale. The brass sundial was made in Philadelphia in1764. This early piece is especially desirable for its large size (11 ¼ inches) and the fact that its maker (Captain Daniel Joy) and first owner (Philadelphia merchant James Pemberton) are all documented.

In addition to clocks and watches, this auction includes in its title “Scientific instruments.” Lot 1059 ($800-1,200) is literally timeless: neither clock nor watch nor sundial nor scientific instrument. It is a mechanical wonder in its way none the less: a four-person tandem bicycle.

It was produced by Columbia circa 1964, reportedly one of two made for the World’s Fair held that year. Five years later, the consignor was a Columbia summer employee. He bought the bike for $35 because, he said, “I thought it would be a great double date opportunity.”

Auction previews are free and open to the public. Previews will be held in Marlborough on Tuesday, October 25 from 12PM – 5PM,  Wednesday, October 26 from 12PM – 7PM, Thursday, October 27 from 12PM-7PM, and on Friday, October 28 from 8AM-9:30AM. Illustrated catalogs for auction 2946M are available from the Subscriptions Department at subscriptions@skinnerinc.com or from the Gallery. Prices realized will be available online at www.skinnerinc.com during and after the sale. The Skinner website also enables users to view all lots in the auction, leave bids, order catalogs and bid live, in real-time through SkinnerLive!