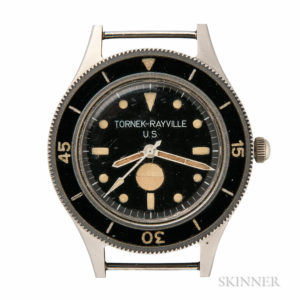 The extensive John F. Gelson collection of watches and watch components provided an important core of the auction. Department head Jay Dowling noted that most of this material had few comparables, as it consisted largely of models and samples. Gelson purchased these “left behinds” when the Hamilton Watch Company disposed of its buildings in 1996. Gelson, the last president of the company, recognized the importance of this endangered archive and meticulously documented his purchases. The result was that at this sale a small group of highly knowledgeable bidders competed to acquire notable pieces. Many items achieved prices well over estimate.

The Illinois “Jump Hour” Wristwatch (Lot 24, estimate of $300-500) exceeded estimate by an even greater amount. This watch sold for $4,920, largely due to the rarity of its Art Deco case. 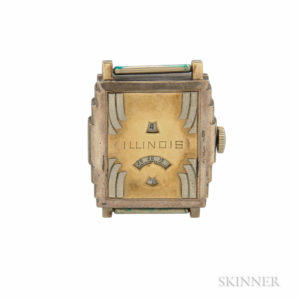 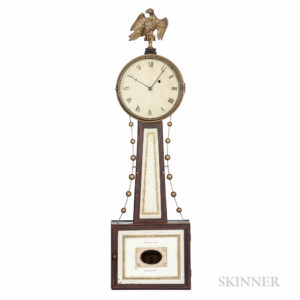 Dowling observed that watches and clocks were not the only categories to draw interest both in the room and from phone and internet bidders from around the country and the globe. Many long-time Skinner clients expressed pleasure at seeing one of the deepest and broadest collections of scientific instruments in many years.

In this category, the Leon Stabinsky collection of scientific instruments attracted spirited bidding. As in many other areas, the unusual, the small, and the intriguing are always in demand.

• Miniature Wimshurst-style Electrostatic Generator, 19th century, dual glass pillars flanking 3-in. plates that rotate on dual pulleys. Operated by a turned wood handle, all resting on a skeletonized base (Lot 383, estimate $200-400). This small wonder of engineering, 6 ½ inches high, sold well over estimate at $738.

Among other high points in a wide-ranging sale were two items that sum up the curiosity and adventurousness of the scientific spirit:

Terrestrial 3-inch Cased Pocket Globe, mid-19th century, made up of twelve hand-colored engraved paper gores, contained in a fishskin-covered case, interior with printed world map inscribed “A Table of Latitudes & Longitudes of Places not given on this Globe,” and “The World as known in Cesar’s Time agreeable to D’Anville.” (Lot 410, estimate $2,000-3,000)
The appeal of this tiny treasure, enhanced by a rare over paste label that helped it achieve a price of $9,925.

Cary 3-inch “Royal Geographical Society” Portable Refractor Telescope, London, finders’ scope, rack-and-pinion focusing, right-angle lens, cylindrical tapered tripod mount, and three eyepieces, all housed in the original mahogany case. (Lot 424, estimate $2,000-3,000). Sold in this auction for $5,228, the well-documented instrument has traveled far. Purchased in 1904 for £33, it was lent to Mr. C.N. Temple for use in northern Nigeria. Subsequently, it was lent to the British Everest expedition of 1933. Two members of that group reached 28,126 feet without oxygen, a record which lasted until 1978. 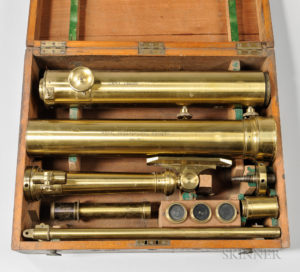 About Skinner
Skinner auctions draw international interest from buyers and consignors alike, with material regularly achieving record prices. The company’s auction and appraisal services focus on fine art, jewelry, furniture, and decorative arts from around the globe, as well as wine, fine musical instruments, rare books, Asian art, clocks, Judaica, and more. Monthly Skinner Discovery auctions feature a breadth of estate material. Widely regarded as one of the most trusted names in the business, Skinner appraisers have appeared on the PBS-TV series, Antiques Roadshow, since the show’s inception. Skinner has galleries in Boston and Marlborough, Massachusetts, as well as in New York City and Miami, Florida, with bidders participating in person, by phone, and online. Join auctions live with SkinnerLive! and Bidsquare. For more information, visit www.skinnerinc.com, find us on Facebook, or follow us on Twitter and Instagram.