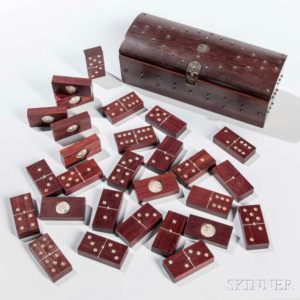 Perfectly timed for Father’s Day, graduation, and all of the festive occasions of summer, Skinner’s Gentleman’s Auction offers a wide variety of items that are destined to be favorite possessions. Some are practical, some are beautiful, and some are just plain fun.  Many combine all these desirable qualities. All have been selected by Skinner’s specialists to intrigue and delight both purchaser and recipient. It is totally permissible for one bidder to fill both roles…

The online-only auction opens for bidding at 10AM on Thursday, June 1 with lots beginning a staggered close on Friday, June 9 at 2PM. Auction previews will take place at Skinner’s Boston Gallery on Wednesday, June 7 from 12-5PM and Thursday, June 8 from 12-5PM.

There are fine choices to please a gentleman with a playful spirit:

♦ A unique set of playing cards, the Harlequin Transformation Deck, with humorous decorations by multi-talented Charles Edward Carryl, successful businessman and author as well as a whimsical illustrator. Produced by Tiffany in 1879, these are a lively example of the Victorian love of embellishing cards with comic versions of the traditional pips. (Lot 1144, est. $400-600) 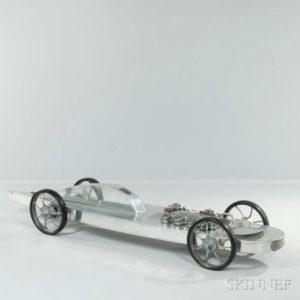 There are numerous items to delight the gentleman host, from fine barware to rare spirits. Offerings include a Sterling Silver Tiffany Cocktail Shaker (Lot 1000, $800-1,200), five St Louis or Baccarat Crystal Decanters (Lot 1008, $200-250), and forty lots of splendid spirits both European and American. 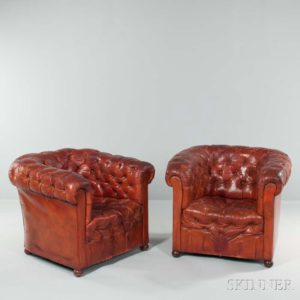 This auction features a carefully curated selection of furniture and accessories that cater especially to masculine style and masculine comfort. Chris Barber confesses that his personal favorites are the Pair of Chesterfield Chairs (Lot 1085, $1,200-1800). He comments that “they are “so classically ‘Gentleman’ that I can’t help but talk about them. They look like they have the patina of years of men’s club gatherings on them, and are so honestly weathered as to be instant old friends.”

Another fine piece is the Carved Walnut-cased “Neptune Chelsea” Ship’s Bell Clock, the apparently unique case carved in high relief and in the round, the crest with Neptune holding his trident, on a base of rockery and marine plants. (Lot 1067, $2,500-3,500)

There are numerous intriguing art works, including several examples of small oil pastels by contemporary American artist Paul Plante. His meticulous hyper-realistic oil pastels most often feature close-ups of the eyes of Maine birds, in which the bright unwinking eyes truly are, as the artist stated, mirrors of the soul. Barber’s personal choice is Four Bird Eyes, each work 4 1/4 x 4 1/4, framed and matted together two by two. (Lot 1151, $200-300).

The Gentleman’s Auction offers choices to satisfy the wants and needs of almost every gentleman. There are gifts for the sporting gentleman, such as Five Carved and Painted Wooden Fish Decoys, carved bodies with sheet metal fins and tails, inset lead weights (Lot 1140, $200-400). Or the Pair of Vintage Red Vinyl 12-ounce Boxing Gloves, Everlast, with nylon laces and yellow labels. (Lot 1179, $50-75).

And there are accessories for the elegant gentleman, from money clips to dress sets, rings, cufflinks and more. Estimates range from $50 to 800, with objects in a wide range of materials and styles.