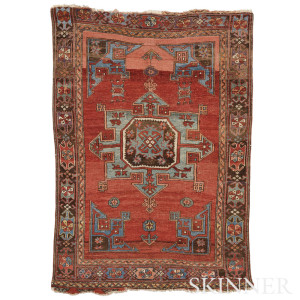 In addition to the auction preview, interested collectors can join Lawrence Kearney, Director of Fine Oriental Rugs & Carpets, for a gallery walk on March 27th, from 5:30–8:00 P.M.  “Antique Oriental Carpets: Bringing Soul to the Modern Interior” will take place at Skinner’s Boston gallery and showcase the virtues of antique rugs – from their character and color to their patina and reasonable prices.

This auction will feature over 50 antique carpets, most in excellent condition, in a variety of styles and color palettes.

“When it comes to decorative carpets, buyers are often searching for a piece that engages and attracts the eye, but does not overpower a room,” said Lawrence Kearney. “Many rugs in this section are perfect for just this reason, as they possess great character and subtle color, while also blending seamlessly with modern furnishings in contemporary home settings.” 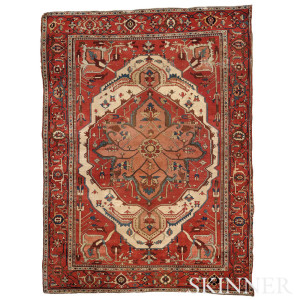 Carpets of note include a beautiful Serapi carpet from Northwest Persia, which depicts a large, ivory and terra-cotta floral center medallion pattern (Lot 190, Estimate $10,000–$12,000).  Its harmonious palette makes this rug a wonderful accompaniment to a variety of design schemes.

Also available is an antique Karadja carpet (Lot 163, Estimate $8,000–$10,000) from the late 19th century, showcasing a light blue field with an all over terra-cotta and light beige strapwork design, along with stylized vines and blossoms.

In addition to decorative carpets, this sale spotlights a strong selection of early collectible rugs. An important highlight is a rare Tekke “Animal-Tree”door rug (Lot 131, Estimate $8,000–$10,000) from West Turkestan. Dating to the mid-19th century, it features a bottom end panel with stylized animals flanking archaic tree-forms. 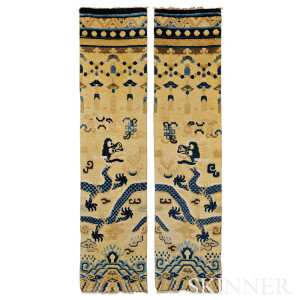 Another note-worthy offering is a pair of Chinese Lamaist pillar rugs, each of which depicts a dragon above a “land meets sea” pattern and below a canopy of strung pearls (Lot 149, Estimate  $3,000–$4,000). These pieces were originally purchased in the 1960s from the estate of Commodore Matthew Perry’s granddaughter.

Other rugs of note include some exceptional 18th and early 19th century Anatolian and Caucasian pieces, in addition to a number of excellent 19th century Persian rugs, ranging in style from urban workshop sophistication to tribal funk.

A broad range of 19th century Central Asian embroideries are on offer, including a striking Shakhrisyabz Suzani, circa 1880, from Uzbekistan (Lot 139, Estimate $7,000–$9,000) with large-scale floral roundels encircled by stylized vines.

Other early textiles include a number of 18th century Ottoman Turkish and Greek Island embroideries, as well as a small group of tapestry-woven Swedish dowry pieces.

Illustrated catalog #2795B is available from the Subscription Department, at 508-970-3240, or from the Gallery. Prices realized will be available online, at www.skinnerinc.com, both during and after the sale. The Skinner website enables users to view every lot in the auctions, leave bids, order catalogs and bid live, in real-time, through SkinnerLive!