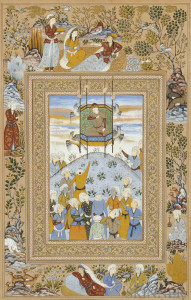 BOSTON, MA – May 8, 2015 – Strong examples of Indian, Persian, Chinese, Korean, and Japanese art covering miniature paintings, jade, ceramics, furniture and more will be on the block during Skinner, Inc.’s live Asian Works of Art auction on May 16th. From more than 500 lots, including several outstanding private collections, buyers will discover a wide range of fresh-to-market material with exceptional provenance.

A world-class offering of Indian art arrives from the former collection of Arthur L. and Genevieve S. Funk. The late Mr. Funk, a well-known professor, spent a great deal of time in India where he and his wife assembled their extensive collection of paintings, wood carvings, iron works and more. Highlights at auction include several miniature paintings – among them, an 18th century miniature depicting Sisupala and his retinue, illustrated in Indian Mythology (1967) (Lot 11, estimated between $10,000 and $15,000). Significant modern Indian paintings are also represented, exemplified by Jamini Roy’s bold depiction of the Goddess Parvati (Lot 15, $10,000 to $15,000). The collection also features several carved wood pieces that were once exhibited at the University of Florida (including lots 46, 47 and 48, $1,800 to $2,200 and $700 to $900)

Additional examples from a treasure trove of miniature paintings include a beautiful series of four miniatures hailing from 18th or 19th century India or Persia, featuring elements from both Persian and Indian schools of painting, each leaf illustrating a different narrative scene (Lot 28, $20,000 to $30,000).

Two Arabic calligraphy manuscripts possibly dating to the 12th century leads a selection of important Arabic and Persian manuscripts on the block (Lot 21, $2,000 to $3,000). 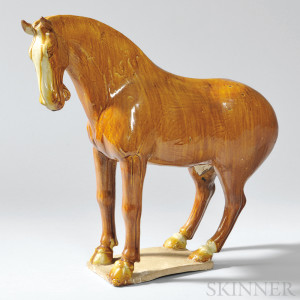 Magnificent Chinese works are well-represented in the May auction, with many pieces hailing from the early Tang and Song dynasties. Such archaic objects include a selection of Tang funerary pieces – from a sancai-glazed pottery figure of a horse (Lot 114, $10,000 to $15,000) to a large painted pottery figure of a groom (Lot 113, $5,000 to $7,000). A variety of Song dynasty tea bowls, treasured in their time as much as they are now, will also be available: among them, a beautiful Jizhou tea bowl decorated with a jumping deer and plants (Lot 127, $800 to $1,000).

Among desirable Chinese textiles up for auction is a private collection of court robes, purchased in Beijing at the turn of the 20th century when the current owner’s grandmother was stationed at the Princeton University Alumni-organized YMCA outpost (Lot 445 to 448, various estimates). 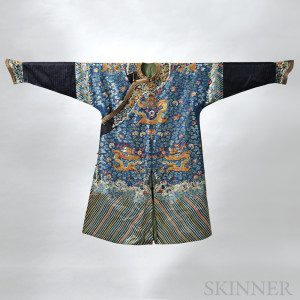 Additional textiles include a vibrant Vajrayogini thangka  from 19th century Tibet, (Lot 71, $4,000 to $6,000) featuring Vajrayogini dancing and drinking upon on a lotus throne. Tibetan art is also well-represented by a selection of remarkable Buddhist works, such as a gilt-bronze figure of Amitayus (Lot 94, $5,000-$7,000), as well as a  ritual bone apron, featuring carved Buddhist deities, masks, and symbols in deep relief on variously shaped bones (Lot 102, $3,000-5,000). A silver filigree jarao wine ewer, adorned with various precious and semi-precious stone insets and filled by the unusual method of pouring liquid into the base (Lot 101, $2,000 to $3,000) rounds out this robust offering of Tibetan works.

Previews for the auction will be held at Skinner’s Boston gallery on Thursday, May 14, from noon to 5 P.M., Friday, May 15th, from noon to 7 P.M., and Saturday, May 16 from 9 A.M. to 10:30 A.M. The illustrated Catalog for sale #2810B is available from the Subscription Department, at 508-970-3240, or from the Gallery. Prices realized will be available online, at www.skinnerinc.com, both during and after the sale. The Skinner website enables users to view every lot in the auctions, leave bids, order catalogs and bid live, in real-time, through SkinnerLive! and Bidsquare.