“Design collectors and enthusiasts will find much to appreciate in this auction, with strong collections of Italian design, Dunbar furniture, Scandinavian design, mid-century American Modern, and early 20th-century pieces on the block. The majority of material in this auction was acquired when it was made, and has remained with the current consignors until now – allowing us to bring numerous pieces to market for the first time.” said Jane Prentiss, Director of 20th Century Design at Skinner.

A singular 21st century highlight to kick off the sale, this sleek, red Italian convertible will draw Ferrari devotees and car aficionados alike to the auction block (Lot 1, estimated between $75,000 to $85,000). Featuring saddle interior and an electric roof, this vehicle has been well-maintained for its next owner.

A classic favorite is the Fornasetti umbrella stand, complete with trompe l’oeil decoration of musical instruments and sheet music, circa 1955 (Lot 3, $800 to $1,200).

Scandinavian design flourished in the Bauhaus-inspired academic circles of the Northeast, as exemplified by several highlights from regional collections purchased in Scandinavia, or directly from Design Research in Cambridge, MA. Two sofas designed by Ben Thompson, founder of The Architects Collaborative and Design Research, are available. Both pieces are rectangular in form and made with Haitian cotton and tubular steel (Lots 486 and 489, $1,000 to $1,200). All of the furnishings Skinner previously offered from the Mary Griggs Burke Estate, many of which were designed by Thompson, sold in the December 2014 auction.

Rounding out this portion of the sale are notable designs by Folke Ohlsson and Hans Wegner. Exceedingly collectible, highlights by Ohlsson include a sofa (Lot 449, $800 to $1,000) and two lounge chairs for Dux (Lot 452, $1,000 to $1,200), all in blue wool reupholstery on teak frames. 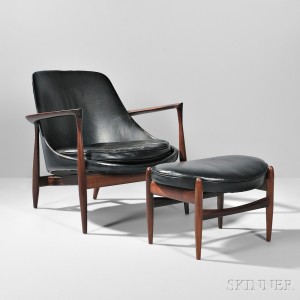 For buyers and collectors drawn to classic design, beautiful wood, and quality craftsmanship, Skinner is pleased to offer a grouping of Dunbar furniture, with examples by designer Edward Wormley.

Superb creations by Wormley include the Dunbar Sheaf of Wheat table, which features a circular top over a steam-bent mahogany base (Lot 252, $700 to $900), as well as an exceptional Dunbar custom credenza, featuring six cupboard doors inset with 19th century Japanese woodblock prints (Lot 258, $1,200 to $1,800).

Mid-century American modern works are well-represented, with a number of sought-after pieces by George Nakashima – including an early walnut sideboard, purchased directly from the designer in the 1960s (Lot 289, $8,000 to $12,000) and a walnut coffee table, arriving directly from the original commissioner (Lot 286, $14,000 to $16,000).

This auction features fine art and sculpture, depicting the full range of items that bring life into a home alongside robust furniture offerings.

Skinner will present a collection of Hyde Solomon paintings, among them, Interior/Exterior, the 1940s oil on canvas that was formerly exhibited at New York’s Vendome Gallery and illustrated in a James Street Gallery catalog (Lot 315, $3,000 to $4,000).

The sale is further enhanced by a perennially cheerful collection of early 20th century Dedham pottery, which will delight lovers of blue and white ceramics (Lots 153-182, estimates vary from $200 to $800). In addition to a large selection of rabbit-patterned tableware, there are several rarer patterns depicting lobsters and crabs (Lots 153-155).