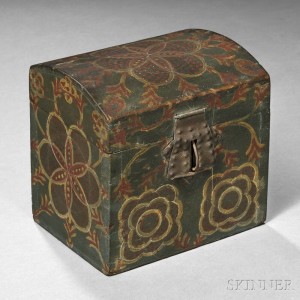 “We’re pleased to offer a broad selection of important material in this auction that will appeal to a wide range of tastes and collectors,” said Stephen Fletcher, Executive Vice President and Director, American Furniture & Decorative Arts.

The auction’s top lot is the extraordinary Phillips Family Needlework Picture (Lot 30, Estimate $800,000 – $1.2 million), created by Sarah Phillips of Rowley, MA, circa 1670. One of just a few surviving 17th century American pictorial needleworks, it is described by Stephen Fletcher as one of the rarest and most important items handled by Skinner’s Americana department to date. Preserved by the Phillips Family of Massachusetts, Sarah Phillips’ needlework picture has a long and well-documented provenance, having remained within the family for over three centuries.  Though it is mentioned in Betty Ring’s exhaustive study Girlhood Embroidery: American Samplers and Pictorial Needlework 1650-1850, it has been exhibited publicly only twice: first during the town of Rowley’s bicentennial in 1840 and once again, just over a century later, at the Museum of Fine Arts, Boston. 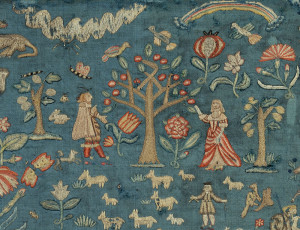 The piece has an ethereal quality, with figures that are carefully arranged on its blue linen background to create an overall balance to the work.  Remarkably, the picture has retained most of its vivid coloring through the centuries.

Another important textile at auction is a patriotic yarn sewn rug with an American eagle clutching in its beak a banner reading ‘E PLURIBUS UNUM” (Lot 1, Estimate $6,000 – $8,000). Created by Sarah Colburn of Lowell, MA and dated 1836, this rug pre-dates many works made during the textile boom in Lowell and remains in very good condition.

Early American prints and paintings abound in this sale, with many illustrating iconic scenes and historic individuals. The Bloody Massacre perpetrated in King Street, BOSTON, on March 5th 1770, by a Party of the 29th REGT. (Lot 2, Estimate $100,000 – $120,000), engraved and printed by Paul Revere, March 1770, is an iconic image that spurred American resentment toward Great Britain on the eve of Revolution.  Highlighting the “Washingtonia” is a Portrait Miniature of George Washington as Colonel of the First Virginia Regiment (Lot 4, Estimate $4,000 – $6,000), after the original depiction by Charles Willson Peale in his famous 1772 portrait of a young Washington. 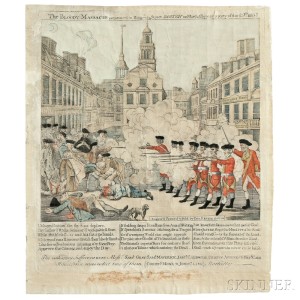 Another  important and possibly unique item is a George Washington Wine Bottle (Lot 5, Estimate $10,000 – $15,000), descended in the family of Major Abraham Kirkpatrick, who rescued a General Neville during the Whiskey Rebellion in 1794. Neville was a close personal friend of George Washington, and it is believed that Washington gave this bottle of wine to Major Kirkpatrick for his bravery during the incident.

Another historic event is memorialized by a rare weathervane commemorating a sighting of “Halley’s Comet” in 1835.  The weathervane measures over six feet long and once rested atop the First Presbyterian Church in Jim Thorpe, PA (Lot 314, Estimate $8,000 – $12,000).

A beautiful item of historical interest, a carved Applewood and 14kt gold jewelry suite by New York jewelers Browne & Spaulding (Lot 13, Estimate $5,000 – $7,000), was presented to William Cullen Bryant or his wife. Fashioned in the form of oak leaves and acorns, this delicate and interesting set was carved from the tree that General Robert E. Lee was sitting under when he was asked to discuss the terms of surrender that would end the Civil War.

Early American furniture is well represented, with examples including a fine Boston Chippendale carved mahogany side chair, with carving attributed to John Welch (Lot 39, Estimate $4,000 – $6,000).  An inlaid walnut tall chest of drawers (Lot 59, Estimate $4,000 – $6,000) from the valley of Virginia, probably Shenandoah County,  is one of a very few examples of this late 18th century style chest that exists today. 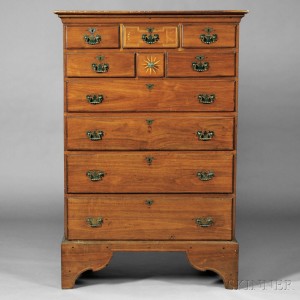 Collectors can also bid on over 200 lots at their convenience during Skinner’s Americana – Online auction, taking place February 24 through March 2. Skinner specialists have hand-picked a selection of American furniture and decorative arts, from beautiful export porcelain to miniatures and utilitarian objects. Bidders also have the added value of previewing the online-only lots in person during the regular Boston preview hours.